Factor analysis is a technique in mathematics that we use to reduce a larger number into a smaller number. Moreover, in this topic, we will talk about it and its various aspects.

What is Factor Analysis?

It refers to a method that reduces a large variable into a smaller variable factor. Furthermore, this technique takes out maximum ordinary variance from all the variables and put them in common score.

Moreover, it is a part of General Linear Model (GLM) and it believes several theories that contain no multicollinearity, linear relationship, true correlation, and relevant variables into the analysis among factors and variables. 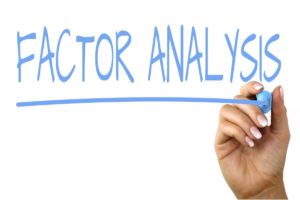 There are different methods that we use in factor analysis from the data set:

It’s the second most favoured technique by researchers. Also, it extracts common variance and put them into factors. Furthermore, this technique doesn’t include the variance of all variables and is used in SEM.

It is on the basis of the correlation matrix and makes use of OLS regression technique in order to predict the factor in image factoring.

It also works on the correlation matrix but uses a maximum likelihood method to factor.

5. Other methods of factor analysis

Alfa factoring outweighs least squares. Weight square is another regression-based method that we use for factoring.

Factor loading- Basically it the correlation coefficient for the factors and variables. Also, it explains the variable on a particular factor shown by variance.

Eigenvalues- Characteristics roots are its other name. Moreover, it explains the variance shown by that particular factor out of the total variance. Furthermore, commonality column helps to know how much variance the first factor explained out of total variance.

Factor Score- It’s another name is the component score. Besides, it’s the score of all rows and columns that we can use as an index for all variables and for further analysis. Moreover, we can standardize it by multiplying it with a common term.

Factor analysis has several assumptions. These include:

It includes the following key concept:

Exploratory factor analysis- It assumes that any variable or indicator can be associated with any factor. Moreover, it is the most common method used by researchers. Furthermore, it isn’t based on any prior theory.

Confirmatory Factor Analysis- It is used to determine the factors loading and factors of measured variables, and to confirm what it expects on the basis of pre-established assumption. Besides, it uses two approaches:

Question. How many types of Factor analysis are there?

Share with friends
Previous
What is Sample Mean and How to Calculate it?
Next
Aneroid Barometer - How Does it Work?