What is Exponential Form?

We all must have heard the word “exponential” before. What does this word mean? Exponential means to become more and more rapid in growth. However, in mathematics, it represents a mathematical expression that has one or more exponents. Hence, we know it as an exponential form.

We can say that a thing may increase with an exponential rate when the increase becomes quicker and quicker as the thing which is talked about becomes larger.

Now let us learn more about the exponential form of numbers which is greatly used and applied in mathematics. 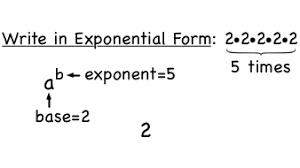 As we discussed earlier that it involves a number of the numerical terms expressed in exponents. Let us take the example of the number 1000.

Let us take another example to further clarify the concept of expressing a number in exponential form.

Now we can express this number in the following ways

The last term which includes 100 can simply be written as 1 because any number when expressed raising it to the power of 0 it equals 1.

Therefore we can clearly say that exponents simply refer to how many times a particular number appears in a numerical term.

Let us take the example of number 32. We can write the number 32 in any one of the following ways

When we express a number in the exponential form then we can say that its power has raised by the exponent. In the above-mentioned example, 25 will be called as 2 to the power 5 or 2 raised to the power of 5.

How to Write a Number in Exponential Form?

As we discussed earlier that it is nothing but simply to express a numerical term raised to certain powers of its prime factors based on the following way: 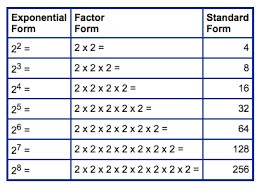 Therefore, to express a number in exponential form the very first step is to write the number as the product of its prime factors.

However, in the exponential form, the same number can be:

Therefore, we can see that expressing a number in its exponential form can be an easier task and it also saves time and space while writing.

Therefore we may conclude that whole numbers can be expressed in exponential form by raising the powers of their prime factors in which the exponent helps in telling us that how many times the base has been used as a factor.

Ques. Among the following which is the correct way to write the number 64 in exponential form?