People are generally mistaken about what the first step of farming or agriculture is. We assume that it is the sowing of seeds. But even before the seeds are sown for germination, we must ensure that the soil is ready for farming. This it is the process of soil preparation.

As we discussed, soil preparation is the first step to be followed when we start the agricultural process. It usually entails the loosening up of the top layer of soil i.e. topsoil. Plants absorb water and nutrients from the soil through their roots, hence it is essential to prepare the soil, so we can have a healthy and bountiful produce.

The soil is prepared by the following methods 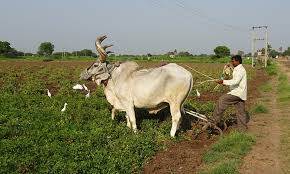 Ploughing is the process of loosening and turning the soil. Its also known as tilling. Ploughing of soil is important for the following reasons

The tools we use for ploughing are: Once the field is ploughed, the topsoil is quite loose. There is a strong possibility that strong winds or rain will wash away the topsoil. The soil then needs to be levelled again to ensure its strong foundation. This levelling of soil is done with an implement called the leveller, which is a heavy wooden or iron plank. Levelling of the field also helps in uniform distribution of water during irrigation. This is the final step of soil preparation.

To increase the fertility of the soil, we add manure to the soil even before we begin sowing the seeds. We add the manure before we plough the field, so it gets properly incorporated into the soil.

Learn more about Manure and Fertilizers here in detail. 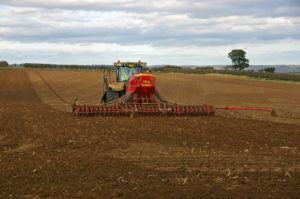 This is the second step in crop production. Once the soil preparation is done, it is now time to sow the seeds. Sowing is the actual process of planting the seeds in the soil. The seeds that are sown have to be selected very carefully and have to of high quality.

The various methods of sowing the seeds are

Precautions to be taken while sowing seeds

Sowing seeds is essentially the most important part of crop production. It is necessary to focus on even the smallest details. The following precautions should be taken when sowing seeds,

Learn more about Protection and Harvesting of Crops here.

Q: Which among the following tools saves labour and time?

Solution: The correct answer is option “b”. A cultivator is a type of farm equipment used for secondary tillage. Nowadays, ploughing is done by a tractor driven cultivator which saves time and labour.

Q1. Write a short note on
A. Seed Sowing
B. Threshing

Answer: A. Sowing of seeds: One of the important parts of crop production is sowing. Good quality seeds are selected and are sown in prepared soil with the help of various tools like traditional tools and seed drill.
Tradition tools: The shape of this tool is like a funnel which is filled with seeds, then the seeds are passed down through two or three pipes having sharp ends and these ends pierce into the soil and place seeds there.
Seed drill: Nowadays, a traditional tool has been replaced by seed drill. This tool is used for sowing with the help of tractors and it sows the seeds uniformly and at proper distances and depth, it also ensures covering of the seeds from soil after sowing, so that seeds could not get damaged by birds and by other organisms. Sowing by using a seed drill saves times and labour.
B. Threshing: In the harvested crops, the grain seeds are separated from the chaff, this process is called as threshing, this is carried out with the help of the machine called as a ‘combine’ which works as harvester and thresher both.

Q2. Arrange the following steps of preparation of soil in correct order.
A. Sowing
B. Levelling
C. Ploughing

a) Ploughing is the loosening of soil using a plough to improve its aeration before sowing the seeds.
b) Land leveling is making the land surface plain. It increases the water holding ability of soil resulting in better yield.
c) Sowing is planting the crops in soil. This is the last step.

Q3. What are the advantages of ploughing?

Answer: A plough is a tool or farm implement used in farming for initial cultivation of soil in preparation for sowing seed or planting to loosen or turn the soil. Ploughs were traditionally drawn by working animals such as oxen and horses, but in modern times are mostly drawn by tractors. The process of loosening the soil for cultivation is called ploughing. The primary purpose of ploughing is to turn over the upper layer of the soil, bringing fresh nutrients to the surface, while burying weeds and the remains of previous crops and allowing them to break down. The advantages of ploughing are:
Loosening of soil can improve air circulation.
The roots can penetrate deeper into the soil, thus holding the plant firmly.
Ploughing enhances the water retention capacity of the soil.
Ploughing uproots the weeds growing in the field and aids in the growth of microbes.

Answer: Preparation of the soil is the first step before the growing of the crop. It helps to turn the soil and loosen it to allow the roots to penetrate deep into it. The loosening of the soil helps in the growth of several soil microbes, earthworms, etc.,
which enrich the soil with humus and other essential nutrients. The three steps involved in soil preparation are:
1) Ploughing
2)Leveling
3)Manuring

It’s not that good

it is seriously insufficient…

Can you be a little more concise and use easy words.

At least learnt something new, Thanks 👍👍…

you should learn about vk rain irrigation system who”s modern method of irrigation . but your knowladge was great