Mycelium is the vegetative component of a fungus, which consists of white or cream-coloured fungal threads or filaments recognized as hyphae. A single mycelium’s size varies from being very tiny to be as common as a forest.

A huge network forms by the branching mycelium masses, typically discovered subterranean. In one cubic inch (2.54 cubic centimetres) of soil, more than 8 miles (13 km) of hyphal filaments can sometimes be discovered. 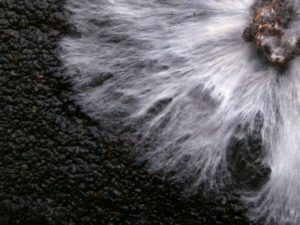 Mycelia is of great importance to the ecosystem as it helps to break down organic material. They have the capacity to eradicate pollutants such as petroleum products and pesticides, acting as biological filters.

Mycelia has hyphae structures called Shiro, and such colonies of fungi are situated below or on the soil or substratum (any biotic or abiotic ground on which an organism develops).

Because mycelia are made up of stiff cell walls, they can pass comparatively readily through the soil or other substrates. They can create fruiting bodies such as mushrooms when two consistent mycelia unite.

Mycelia are finger-like buildings that expand outward to find water and nutrients to satisfy the requirements of the fungi body. Nutrients are broken down into monomers and then absorbed through facilitated diffusion and active transport.

By assisting them to achieve water and nutrient resources from the broader setting, fungoid mycelia participate in symbiotic interactions with green crops.

When a spore germinates to create a sort recognized as homokaryotic mycelia, mycelia is engaged in reproduction. The homokaryotic also referred to as homokaryon, are mycelia that have the same genotype nuclei.

When two monokaryons fall into touch with each other, in a mechanism recognized as hyphal anastomoses, the hyphal pillars split open. This enables vegetatively aligned monokaryon atoms to travel into the other monokaryon’s mycelia.

This ultimately results in binucleate cells, subsequently, dikaryon mycelium forms. The dikaryotic mycelium can generate fruiting bodies engaged in sexual reproduction, depending on whether the internal circumstances (among others, moisture, temperature, and pH).

As mycelium continues to grow and spread within or on the ground of the substratum. It absorbs nutrients which then transfer to promote the growth and reproduction of the fruiting organisms.

Mycelia even helps with the control of pests as they compete with subterranean bacteria and viruses and generate toxins to eliminate them. We also use mycelia to manage pests such as ants, termites, and beetles as micro-pesticides.

Since mycelia cause negligible environmental harm, it can act as efficient long-term processes for the control of natural pests. Horticulturalists and the natural environment benefit greatly from mycelial structures.

Mycelium plays a significant part in the decomposition of multiple complicated organic compounds because they develop and distributed far and large.

This transforms biomass into compost. Through their symbiotic relationship with crops, they can improve crop yields. They can spoil the meat.

Q. Which of the following cell contains many nuclei?