Introduction to Difference Between Osmosis and Diffusion

Difference between Osmosis and diffusion certainly exists. Each carries an equal amount of importance in our bodies. Lack of any of these can be very harmful to the body.

Diffusion takes place when molecules move from an area with a high concentration to an area of lower concentration. On the other hand, osmosis involves moving of water and other solvents via a semipermeable layer from a less concentrated solution to a higher concentration which leaves other bits of matter in its wake. We will further learn about the difference between osmosis and diffusion below. 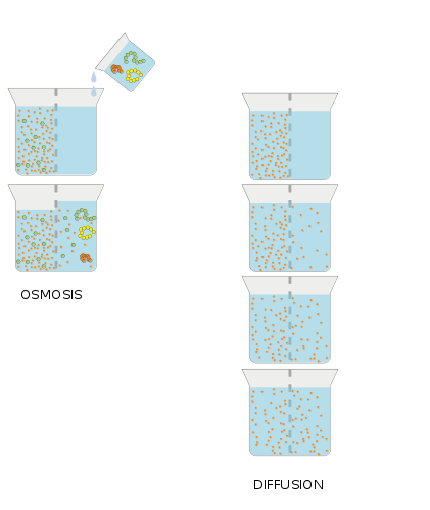 To understand it better, you can take a blood sample and add water to it. You will notice that the red blood cells swell when water enters them. This is due to the blood plasma becoming less concentrated in comparison to the inside of the RBC.

Many gases and materials certainly dissolve in a liquid. Afterwards, diffusion occurs from high concentration to a lower concentration liquid. Thus, you can see this by carrying out a little demonstration of perfume.

You will notice that when you spray perfume in the air, the volatile molecules of the perfume start spreading out in the air from the concentrated point of origin.

Similarly, diffusion happens without a permeable membrane in a liquid like water. The diffusion of small molecules throughout animal or plant cell membranes follows a concentration gradient.

For instance, if there is a higher level of oxygen outside the cell, it diffuses in the cell until the oxygen concentration becomes equal to the outside plus inside of the cell.

The variance of Moving Molecules Regarding Difference Between Osmosis and Diffusion

Another difference between osmosis and diffusion is that the molecules vary. When diffusion takes place across a membrane, it is dependent on the molecule’s size as well as the electric charge.

Similarly, the smaller the molecule, the faster it will diffuse when compared to larger molecules. On the other hand, the molecules which are charged do not diffuse across the animals or plants cell membranes.

As these cell membranes constitute hydrophobic liquids and repel the molecules which are charged, these molecules have to enter or leave the cells via other mechanisms. This repelling is similar to the repelling of vinegar by oil.

On the other hand, osmosis is the flow of water molecules. It is dependent on the concentration of the particles and not the kind of molecule found on each side of the membranes.

Finally, we have another difference between osmosis and diffusion which relates to the semipermeable membrane. Diffusion can take place with or without a membrane between the two areas of various molecule concentrations.

But, when we talk about osmosis, we see that it happens only throughout a semipermeable membrane. This membrane prevents various particles or molecules to travel easily between two sides. Moreover, it also allows water to pass through.

Question– Which of the following is followed in Osmosis?