An ecosystem refers to a functional unit of nature in which living organisms interact among themselves as well as with the surrounding physical environment. Ecologists look at the entire biosphere as a global ecosystem. Besides, the forest ecosystem is a part of the terrestrial ecosystem.

It, however, may vary largely in size i.e. from a small pond to a sea or a large forest. Usually, these are self-sustaining. We can divide the ecosystems into two broad categories, namely, terrestrial ecosystem and aquatic ecosystem.

The terrestrial ecosystem includes desert, grassland and forest ecosystem, whereas pond, lake, wetland and river ecosystem are parts of the aquatic ecosystem. 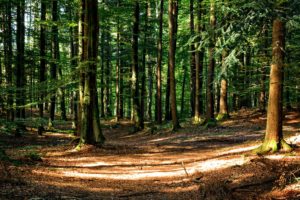 What is Forest Ecosystem?

A forest ecosystem is a functional unit or a system which comprises of soil, trees, insects, animals, birds, and man as its interacting units. A forest is a large and complex ecosystem and hence has greater species diversity.

Also, it is much more stable and resistant to the detrimental changes as compared to the small ecosystems such as wetlands and grasslands.

These components interact with each other in an ecosystem and thus, this interaction among them makes it self-sustainable.

Structural Features of the Forest Ecosystem

The two main structural features of a forest ecosystem are:

Components of a Forest Ecosystem

The components of a forest ecosystem are as follows:

The basic requirement for any ecosystem to function and sustain is the constant input of solar energy. Plants are also the producers in a forest ecosystem.

There are two types of productivity in a forest ecosystem, primary and secondary. Primary productivity means the rate of capture of solar energy or biomass production per unit area over a period of time by the plants during photosynthesis.

Thus, NPP is the amount of biomass left after the utilization by plants or the producers. We can hence say that NPP is the amount which is available for the consumption to herbivores and decomposers. Secondary productivity means the rate of absorption of food energy by the consumers.

Decomposition is an extremely oxygen-requiring process. In the process of decomposition, decomposers convert the complex organic compounds of detritus into inorganic substances such as carbon dioxide, water and nutrients.

Detritus is the remains of the dead plant such as leaves, bark, flowers and also the dead remains of the animals including their faecal matter. The steps involved in the process of decomposition are fragmentation, leaching, catabolism, humification and mineralization.

In the process of fragmentation, detritivores break down the detritus into smaller particles. In the process of leaching, water-soluble inorganic nutrients descend down into the soil and settle as unavailable salts.

Under the process of catabolism, bacterial and fungal enzymes reduce detritus into simpler inorganic substances. Humification and mineralization processes take place during the decomposition of soil and not detritus.

The process of humification leads to the accumulation of humus which undergoes decomposition at a very slow rate. In the process of mineralization, the humus gets further degraded by microbes and inorganic nutrients are released.

Energy flows in a single direction. Firstly, plants capture solar energy and then, transfer the food to decomposers. Organisms of different trophic levels are connected to each other for food or energy relationship and thus form a food chain.

Energy Pyramid is always upright because energy flows from one trophic level to the next trophic level and in this process, some energy is always lost as heat at each step.

Nutrient cycling refers to the storage and movement of nutrient elements through the various components of the ecosystem. There are two types of Nutrient cycling, gaseous and sedimentary.

Q. What are the three major forest ecosystems?

However, there exist more specific types of forest ecosystems within these larger regions.