The ribosome is a complex macromolecular machine that is easily found in almost all living cells. These link the amino acids together in an order that is specified by messenger RNA (mRNA) molecules. The ribosomes contain two major components that are the small ribosomal subunits, these read the RNA and also the larger sub-units. These join amino acids for making a polypeptide chain. Every single sub-units comprises one or more ribosomal RNA molecules and a huge variety of the ribosomal proteins. The ribosomes and the molecules in the association are also known as the translational apparatus. Also, learn the function of the ribosome here. 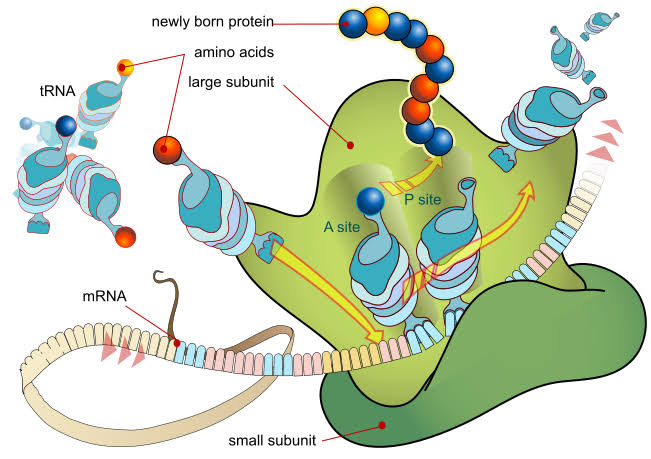 The ribosome is a structure of a cell that forms a protein. We need the protein for various cell functions such as repairing the damage or directing the chemical processes. These can be found floating within the cytoplasm or having an attachment with the endoplasmic reticulum.

Present within the two areas of cytoplasm. They are visible scattered in the cytoplasm and some of them are having a connection with the endoplasmic reticulum. Whenever connected to the ER they are referred to as rough endoplasmic reticulum or rough ER. The free and the bound ribosomes are so much alike in structure and are also having an association with the protein synthesis. Near about 37% to 62% of the RNA is comprising of the RNA and the rest is proteins.

Prokaryotes are having 70S ribosomes respectively subunits comprising the little subunit of 30S and the bigger subunit that is of 50S. Eukaryotes have 80S ribosomes respectively containing little (40S) and substantial (60S) subunits. The ribosomes visible in the chloroplasts of mitochondria of the eukaryotes are having big and little subunits composed of proteins inside a 70S particle. Share a center structure that is so much alike to all ribosomes in spite of changes in its size.

The RNA has an arrangement in different tertiary structures. The RNA in the bigger ribosomes is into numerous continuous infusions as they start creating loops out of the center of the structure without disturbing it or altering it. The contrast between those of eukaryotic and bacteria come in use for making antibiotics that can crush bacterial disease without damaging the human cells.

The ribosomal peptidyl transferase can transfer:

Explanation: Ribosomal peptidyl transferase can transfers a peptide chain over the tRNA in the P site of the ribosome to the tRNA’s amino acid in the A site of a similar ribosome.

The Shine and Dalgarno are located in:

Explanation: The 16S rRNA forms the smaller subunit that recognizes the mRNA via its Shine and Dalgarno sequence. This is a purine-rich sequence around 10 amino acids upstream to the translation start site.