You might want to ask why do plants breathe? Why do they need food and energy when all that they do is just stand! No! Plants perform all the tasks that you perform! Ever wondered about it? In this chapter, we will look at the aerobic respiration in plants and learn about the respiration quotient. These are really interesting concepts and we are sure that you are going to get hooked on this chapter till the end!

What do you think the answer is? Yes, plants need oxygen for respiration but at the same time they also give out carbon dioxide. Thus, plants have a proper system to ensure the availability of oxygen. 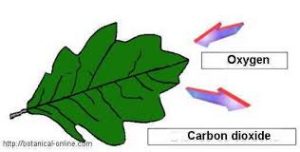 Unlike animals, plants do not possess any specialized organs for the exchange of gases but they have lenticels and stomata (present in stems and leaves respectively) that carry out the function of the gaseous exchange.

It is important to note that each living cell in a plant is located quite close to the surface of the plant and in case of stems, the living cells are arranged in the form of thin layers beneath and inside the bark and have openings. The openings are the lenticels. Thereby, the respiration and translocation take place at every part of the plant.

The complete combustion of glucose produces H2O and CO2 as end products and releases energy in the form of heat. In case, this energy is required by the cell, it will utilize accordingly. The following reaction explains the entire process:

The Process of Respiration

During the process of respiration, plants utilise O2 and carbon dioxide. Energy and water are the products. There is also a situation when then the oxygen is not available. For instance, the first cell on this planet must have carried out the reaction in the absence of oxygen and even in the current living world we are aware of several living organisms adapted to anaerobic conditions.

Some of these organisms are facultative and some are obligate. In any of these cases, all living organisms retain enzymatic machinery to partially oxidize glucose in the absence of oxygen. This process is Glycolysis which includes breaking down of glucose into pyruvic acid.

The process of respiration in roots happens in the following way:

Just like in animals, plants also have two types of respiration. They are: “Respiratory quotient is the ratio of CO2 produced to O2 consumed while food is being metabolized.”

where RQ stands for Respiratory Quotient. RQ depends on the type of respiratory substrate in respiration. When carbohydrate is the substrate, RQ becomes 1 because it is completely oxidized. It implies that the amounts of O2 and CO2 are equal. This reaction is displayed in the figure below –

When respiration uses fats, the RQ becomes less than 1. Following equation shows the calculation of RQ when fatty acid and tripalmitin are used as substrate:

Q: Write a note on aerobic respiration in plants.

Ans: For aerobic respiration to take place in mitochondria, plants transport pyruvate into mitochondria from the cytoplasm. The most important events of this respiration are:

Pyruvate, formed during glycolytic catabolism of carbohydrates in the cytosol, enters the matrix of mitochondria and it undergoes oxidative decarboxylation by the complex set of reaction. Pyruvic dehydrogenase catalyses the entire process.  This reaction requires the involvement of several coenzymes such as Coenzyme A and NAD+.

During this entire process, 2 molecules of pyretic acid produce two molecules of NADH. The acetyl CoA enters into a cyclic pathway called Kreb’s cycle or tricarboxylic acid. It gets its name from the scientist Hans Kreb. He first elucidated this cycle.

Share with friends
Previous
Glycolysis and Fermentation
Next
Respiration in Plants