The main functions of stems are to support and elevation of leaves, fruits, and flowers. Stem arranges leaves in a way that it gets direct sunlight to perform photosynthesis. Xylem and Phloem conduct water across the plant. Stems stores food, water, and nutrients. Cells of a stem, meristems, produce new living tissues. Underground stem, Aerial stem, and subaerial stem are three different types of Stem. A stem has many important functions it performs other than letting you climb a tree. Let us take an in-depth look at the stem of plants.

Table of content
1 Suggested Videos
2 Functions of Stem
2.1 Browse more Topics under Anatomy Of Flowering Plants
3 Structure of a Stem
3.1 The cortex can be further divided into three layers:
4 Growth in a Stem
5 Types of Stems
5.1 Underground stems
5.2 Subaerial Stems
5.3 Aerial Stems
6 Solved Example for You
7 FAQ’s for You

A plant stem is one of the two main structural axes of a vascular plant. It is the part of the plant that lies above the ground. Few stems are also found underground and are considered to be stem modifications.

Structure of a Stem

The stem divides into nodes and internodes. The nodes give rise to the leaves and hold the buds which grow into branches. The internodes separate two nodes.

Internally, it contains three basic types of tissues: Dermal tissue, Ground tissue, and Vascular tissue all of which are made of simple cells.

Learn more about the concept of the Tissue System here in detail.

The cortex can be further divided into three layers:

What are Plant Tissues?

Growth in a Stem

Based on their location with respect to the ground, there are three types of stems:

These stems remain at the ground level and produce aerial shoots that rise above the soil. Their roots are superficially present. These stems are meant for storage of food and perennation. These stems are also capable of vegetative propagation. 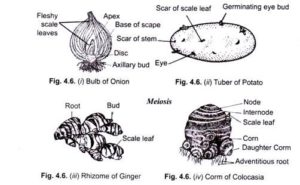 They are of different types as follows:

These stems run parallel to the ground and give off roots at certain intervals or nodes. 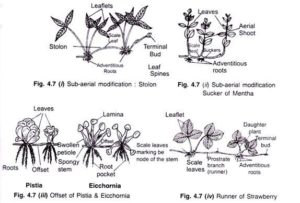 They are further divided into the following types:

These stems are found above the ground and perform varied functions. 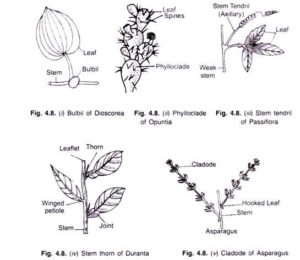 They are of the following types:

Q: What kind of a stem is a potato?

Sol: The correct option is  (a) Tuber

A potato is an underground modification of a stem and it stores food in the form of starch. This type of stem modification is called a tuber.

Q1. Function of stem is?

Answer: The main functions of stems are as follows,
The stems bears branches and leaves and also gives place from where flowers and fruits grow.
Conduction of fluids and minerals between the roots and the shoots in the xylem and phloem.
Storage of food.
Stems have meristems that generate new living tissue.

Q2. Write the main functions of the stem.

Answer: Functions of the stems are:
1. It bears and supports leaves, flowers and fruits.
2. The various appendages borne on the stem are placed in such a fashion that they are able to carry out their functions most effectively.
3. It conducts water and mineral salts from roots to the leaves and fruits.
4. The food manufactured in the leaves is transported to the roots, fruits and organs of storage through the stem.
5. Every year, it adds new cells, tissues and organs which are required for the continued functioning of plants.

Q4. The plants with weak stem growing by spreading on the ground are
A. Creepers
B. Runners
C. Climbers
D. None of above

Answer: Creeper is considered to be the plant that grows along the ground, by means of extending stem or branches and produce fiber-like roots that arise from the base of the stem and such weak stem are called prostrate stem.
Runners are the stem that grows on the ground that forms adventitious roots and able to give rise to a new plant.
Climbers are the plants that climb up other plant or object by the help of tendrils.
So the correct option is ‘Creepers’