Do you know what fermentation is? NO! It is not only the wine or the alcohol that ferments! We know that sounds interesting, but what we are going to learn today is also very, very interesting! In this chapter, we will cover the concepts of glycolysis and fermentation. These concepts are very important as they form a major part of the plants’ respiration process. So you see? Fermentation is not just that glass of classic red wine!

Table of content
1 Suggested Videos
2 What is Glycolysis?
2.1 Browse more Topics under Respiration In Plants
3 What is Fermentation?
4 Solved Examples for You

Glycolysis gets its name from two Greek words, i.e. Glycos which means sugar and lysis means splitting. Otto Meyerhof, J. Parnas and Gustav were the first ones to give the scheme of glycolysis. In case of anaerobic respiration, plants carry out respiration via glycolysis. This process takes place in the cytoplasm of the cells.

Here, the plants carry out the partial oxidation of glucose. This results in two molecules of pyruvic acid. Glucose and fructose are phosphorylated to give rise to glucose-6-phosphate via enzyme hexokinase. This phosphorylated glucose isomerizes to produce fructose-6-phosphate.

We have shown the steps of Glycolysis in the figure below. In this process, a chain of ten reactions takes place under the control of various enzymes and the outcome is pyruvate.

ATP is utilized in two steps of Glycolysis:

The fructose-1, 6-diphosphate is broken into two compounds which are isomers of each other. These are,

This is all about glycolysis. Now, we move on to the next concept of fermentation.

In this process, the plants carry out the incomplete oxidation of glucose. this process takes place under anaerobic conditions via a set of reactions. In these reactions, pyruvic acid converts into ethanol and carbon dioxide. Two enzymes catalyse these reactions. They are alcohol dehydrogenase and acid-decarboxylase. Other organisms such as bacteria produce lactic acid from pyruvic acid. 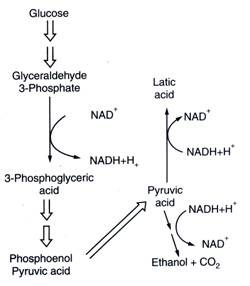 In animal cells as well, during muscle exercise, in case of inadequacy of oxygen for cellular respiration, pyruvic acid reduces to lactic acid by lactate dehydrogenase. NADH+H+ is the reducing agent which oxidises to NAD+ in the process.

Both alcohol and lactic acid fermentation release very less energy. Both these process are hazardous because they produce alcohol or acid during the process. The fermentation process is used in our daily life such as in the formation of curd, vinegar, bread and alcoholic drinks.

Q1: Describe the significance of fermentation.

Ans: Fermentation process is very important in industries. They culture micro-organisms in very large numbers. Most of the industries use them for the following purposes:

Q2: How is glycolysis different from Krebs cycle?