Surely you have faced a situation where some important appliance stops working because the cells run out. What does that mean? That means the cell is no more able to give current or we can say that it has no more energy stored.  This means that the energy that is the chemical energy is consumed in the electric circuits. So in order to find out the amount of energy consumed, we study the electric energy or electric power.

To under the concept of electric energy, let us consider a conductor carrying the current I and potential difference V between the two endpoints A and B. Let us denoted the electric potential of A and B as V(A) and V(B). As we know that current is flowing from A to B so  V(A) >V(B) and the potential difference across AB is V = V(A) – V(B) > 0

NOW, in a time interval Δt, an amount of charge ΔQ is equal to IΔt moves from point A to B of the circuit and the work was done by the electric field is equal to the product of V and ΔQ.

Here if the charges in the conductor move without collisions, their kinetic energy would also change. Conservation of total energy is ΔK = I V Δt > 0. The amount of energy dissipated as heat in a conductor in a time interval Δt is,

The SI unit of power is watt (W). One watt is the power consumed by the device catting 1A of current when operated at a potential difference of 1 V.

Applying ohms law we can write

The above equation is the power loss in a conductor of resistance R which carries the current I. The application of electrical power is that it is transmitted from the power stations which later on reaches our homes and the industrial factories via transmission cables.

Now we know that the transmission of power is very costly. So how do we minimize the power loss in transmission cables? Let us consider a device R to which a power is to be delivered via the cables having resistance Rc.  So if V is the voltage across R and current I then,

The wires which are connected to the device from the power station has finite resistance Rc. So, Pc = I² Rc

Hence the power wasted in connecting the wires is inversely proportional to V². So the resistance  Rc of the transmission cable is considerable. 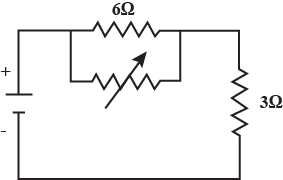 Q2.  An electric heater has a resistance of 150 ohms and can bear a maximum current of 1 ampere. If we use the heater  on 220-volt mains, the least resistance required in the circuit will be

Solution: The correct option is “A”. Given that the heater can bear a maximum current of 1 ampere we need to add a resistance to the circuit in series with the heater so that current is less or equal to 1 ampere. Let that resistance be R, then (150+ R) × 1 = 220. R = 70 ohm.