We know that existing cells transfer genetic information to the new cells during cell division. What do you think will happen if each new cell receives only half the set of genetic information? Yes, the cell will not be able to function properly. This is why the DNA in an existing cells needs to be doubled (or copied) so that each new cell gets the full set of instructions. This process is DNA replication. Let’s learn more about it.

Along with the double-helix structure of DNA, Watson and Crick also proposed a scheme for DNA replication. They suggested that the two DNA strands would separate and become a template for synthesis of complementary DNA strands. Therefore, each new DNA molecule would have one parental and one new DNA strand.

This scheme was referred to as semiconservative DNA replication. In 1958, Matthew Meselson and Franklin Stahl performed the following experiment to prove this mode of replication: The Machinery Of DNA Replication

It is the main enzyme needed for DNA replication. It uses DNA as a template to catalyze the polymerization of deoxynucleotides. DNA Polymerases should have the following properties:

Replication cannot start randomly at any place in DNA. It starts at a specific place in E.coli  DNA called the ‘origin of replication’.

Since it will require a lot of energy to separate the two DNA strands for their entire length, replication usually starts within a small opening in the DNA helix. This is the ‘replication fork’. DNA polymerase can function only in one direction 5′ → 3′. Therefore, replication of the DNA strand with polarity 3′ → 5′ is continuous.

This is also called the ‘leading strand’. While on the DNA strand with polarity 5′ → 3′, it is discontinuous and results in the formation of fragments of new DNA. This strand is the ‘lagging strand’.

This is the enzyme that joins the discontinuously synthesized fragments of DNA. In eukaryotes, DNA replication occurs in the S phase of the cell cycle. Moreover, the replication of DNA and cell division should be highly coordinated. If a cell fails to divide after DNA replication, it results in polyploidy – a condition in which a cell has more than the normal number of chromosomes. 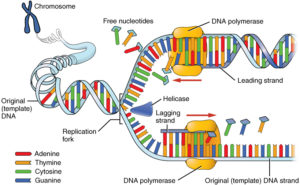 Q1: In the Meselson and Stahl experiment, if DNA was extracted after 60 minutes in the 14NH4Cl medium, what would be the DNA densities?

Sol: The answer is option ‘a’. After 60 minutes, i.e. three generations in the 14NH4Cl medium, the extracted DNA will show 75% light density and 25% intermediate density.

Share with friends
Previous
The DNA
Next
The Genetic Material