You may have seen barcodes on items in a grocery store. These barcodes are used to identify the item. Scanning the barcode helps the store to track that item. In the same way, there also exists a genetic code. It is a set of rules on the mRNA that tells the cell which amino acid should be added to the polymer.

The process of deciphering this genetic code was extremely challenging and involved multiple scientists from different areas. Let’s learn who they were and how they contributed.

The work of all these scientists finally gave a checkerboard for the genetic code as shown below: 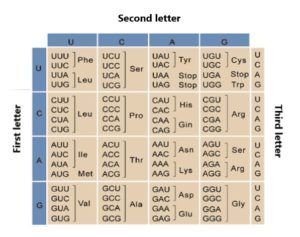 Salient Features of the Genetic Code

The Genetic Code And Mutations

You may have already learned about mutations that involve large deletions or rearrangement of segments of DNA. These result in loss or gain of a gene and therefore, a function. What about mutations or changes in a single base pair of a codon? These are called point mutations. A classic example is a point mutation in a gene for beta globin chain.

A change in a single base pair in this gene changes the amino acid glutamine to valine. This results in a disease called sickle cell anaemia. There are other types of mutations too. Let’s use the following statement with three-letter words like the genetic code, as an example:

In both the above cases, the frame of reading is shifted changing the meaning of the sentence. If similar insertions of one or two bases happen in the genetic code, the frame will shift and change the sequence of amino acids added. This is called a frameshift insertion.

Again, the frame has shifted changing the meaning of the sentence. But, this time letters were deleted, so this is a frameshift deletion. Inserting or deleting three letters (or multiples of three) adds or deletes one codon and therefore, one amino acid. This does not affect the reading frame. Let’s use the above sentence as an example.

Amino acids have no special ability to read the codons. Then how are the codons read? Francis Crick proposed that there is an ‘adaptor molecule’ that reads the codons and also binds to specific amino acids. This adaptor molecule was found to be tRNA or transfer RNA. The tRNA has the following parts:

There are specific tRNAs for each amino acid. A special tRNA called initiator tRNA initiates the process of translation. There are no tRNAs for stop codons. 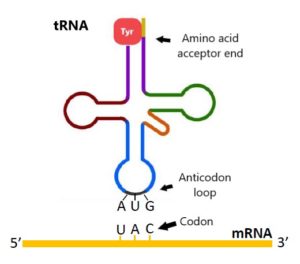 A mRNA also has some additional, untranslated regions or UTRs. They exist before the start codon at the 5′ end and after the stop codon at the 3′ end and are essential for efficient translation. Like transcription, translation has the following three steps.

Translation occurs in the ribosome. In the inactive state, the ribosome consists of a large and small subunit. Translation begins when the small subunit encounters a mRNA. The ribosome binds to the start codon (AUG) on the mRNA to initiate translation. The initiator tRNA brings the first amino acid encoded by AUG i.e. methionine.

This phase also involves activation of amino acids in the presence of ATP and linking to their specific tRNA. This is called charging of tRNA or aminoacylation of tRNA. When two charged tRNAs are close enough, it favours formation of a peptide bond between them. The large subunit of the ribosome has two sites for subsequent amino acids to bind and to be close enough to form peptide bonds. The ribosome also acts as a catalyst for peptide bond formation.

Elongation continues till the ribosome reaches the stop codons (UAA or UAG or UGA). At this point, a release factor binds to the stop codon and terminates translation by releasing the polypeptide and mRNA from the ribosome. Q1: Use the genetic code checkerboard to list the amino acid sequence resulting from the following mRNA sequence: 5′-A U A G C A G G A C U U-3′.

Sol: The answer is 5′- isoleucine-alanine-glycine-leucine -3′. If you use the checkerboard, you can see that AUA codes for isoleucine, GCA codes for alanine, GGA codes for glycine and CUU codes for leucine.