Scientists had narrowed down that the genetic material was on chromosomes in the nucleus of a cell. However, the exact molecule was discovered only much later. Let’s take a look at the series of experiments that scientists undertook that brought us closer to the discovery of DNA.

The S strain bacteria have a polysaccharide coat which gives rise to smooth, shiny colonies. The R strain lacks this coat and hence, it gives rough colonies. Also, the S strain is virulent and causes pneumonia; while the R strain is non-virulent. He performed the following experiment with these strains and saw different observations. 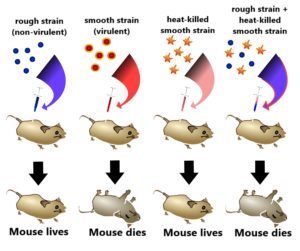 Avery, MacLeod, and McCarty, together set out to determine the biochemical nature of the ‘transforming principle’ identified by Griffith. These people purified DNA, RNA, and proteins from the heat-killed S strain and determined which macromolecule converted the R strain into the S strain.

Conclusions – This experiment conclusively showed that DNA is the genetic material transferred from virus to bacteria, and not protein.

For a molecule to act as the genetic material, it should have the following characteristics:

Q1: Hershey and Chase labelled viral DNA with which radioactive element in their experiment?

Sol: The answer is ‘c’. They used radioactive phosphorus to label DNA since DNA contains phosphorus.

Share with friends
Previous
Replication
Next
Sequences and Series