In every organization, in order to cope with the volume of work, managers need to delegate authority to several employees. Delegation is a process of giving people responsibilities and sharing the workload in order to get things done. In this article, we will understand what it means to delegate and the principles and barriers of delegation.

Why should a manager delegate?

In any organization, it is not possible for a single person to control and manage all activities of the business. This is because every individual has mental and physical limitations. Also, managers can also supervise subordinates up to a certain limit.

Therefore, when the number of subordinates increases beyond the managing capacity, a manager needs to delegate powers to people who perform his tasks for him. At the core, a manager is not about doing things himself but more about how he gets things done through others. Keeping the organization’s objectives in mind, a manager assigns duties and authority to his subordinates. 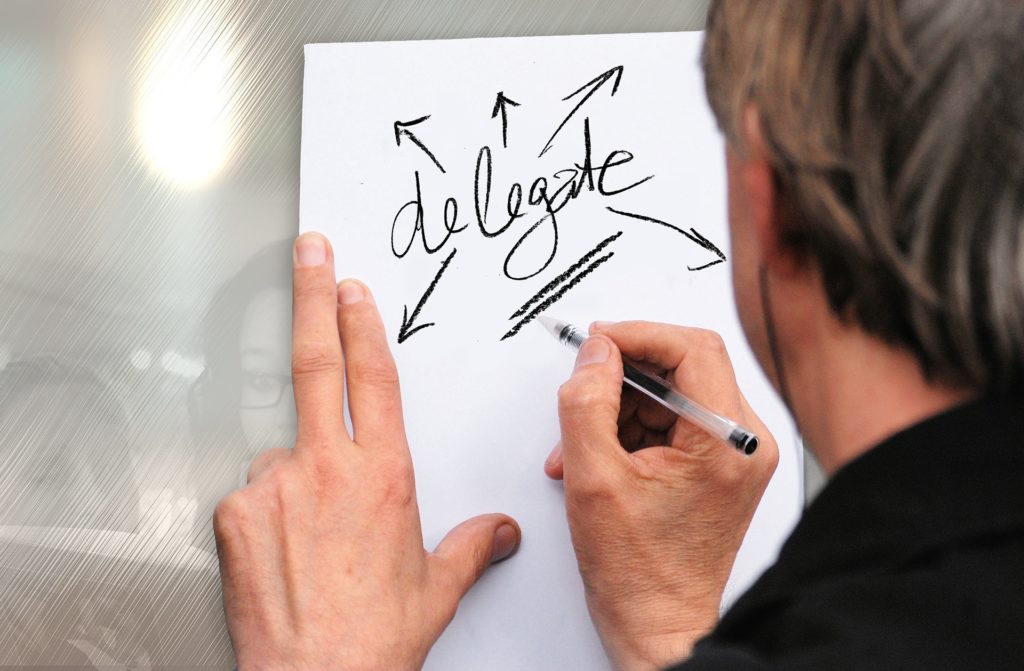 Depending on his management capabilities, a manager might delegate more or less of his tasks. Among other things, having a demarked authority-responsibility relationship with the subordinates helps a manager maintain a healthy relationship.

It also benefits him since his subordinates can offer specialized knowledge helping him achieve the company’s goals. Delegation is an essential administrative technique. However, a manager cannot delegate his responsibilities to someone else.

There are three primary reasons which deter a manager from delegating tasks:

Delegation is a technique and in order to perfect it, managers need some practice. Further, there are some principles which can make delegation more effective.

When a manager delegates authority, he must ensure that the delegation is clear in terms of its contents, scope, functional relations, and assignments.

In other words, the delegatee must have a clear idea about his tasks and how it fits into the overall plan. This is important because any ambiguity in delegating authority usually produces poor results.

Another important aspect is that the delegation should provide clarity with respect to the horizontal and vertical relationships od the position of each subordinate with respect to other positions in the organization.

The idea is that all employees must know their position in the organization and in the overall management hierarchy. Therefore, managers must know the people working under and above him.

By having clarity of delegation, the manager, as well as the subordinates, understand their roles better, minimizing conflicts. However, higher up in the organization, it is difficult to have such clarity about delegations. Also, clarity does not imply rigidity. As the work or the requirement changes, delegations are modified accordingly.

It is important that the manager is aware of the results expected from the subordinate before delegating authority to him. This allows him to delegate adequate authority to accomplish results.

This is based on the assumption that in an organization, goals are set, plans are made well in advance, and tasks are set-up to accomplish them. This approach helps managers by reducing the perils of delegating too much or too little authority.

No delegation of responsibility

An employee cannot delegate responsibility, or the obligation to complete a task when he is delegating authority to a subordinate. For example, if the CEO of a company appoints a sales manager, he gives him some authority to perform his duties.

However, the CEO has the primary responsibility for the overall growth of the company – including sales. Appointing a sales manager does not absolve him of his responsibility. He is still accountable to the Board of Directors.

If employees started delegating responsibilities, then there three consequences will follow:

Therefore, responsibility is not delegated along with authority. For that matter, new responsibilities are created at each level.

Parity of Authority and Responsibility

Authority and responsibility are coextensive. A manager can hold a subordinate accountable for the tasks assigned to him to the extent of the authority delegated for accomplishing them.

The manager cannot hold his subordinate accountable for a task for which he has no authority. However, this parity between authority and responsibility is not mathematical.

Many experts have challenged this parity and have raised several doubts. According to them, duties are related to objectives and activities; obligations are related to attitudes; authority is related to rights. Therefore, while these three things are related, it is difficult for a manager to express them and measure their equality.

Further, authorities delegated to subordinates are usually subjected to restrictions, both internal and external to the organization. These restrictions make it more difficult to measure the parity of authority and responsibility. On the other hand, there are some managers who cover up their failures by blaming the lack of desired authority.

Under normal circumstances, a manager delegates authority to his subordinate to share the workload. He also pushes down the process of decision-making as close to the source of information and action as possible.

Remember, a manager does not absolve himself of his responsibilities by delegating his authority. Therefore, it is imperative that the manager devices control techniques which help him ensure the proper use of the delegated authority.

These control techniques should report deviations immediately and not interfere with the authority itself. Managers must choose subordinates carefully for delegation.

Also, a manager can recover the authority delegated. Further, there are times when certain situations require pooling the authority of multiple managers for decision-making. This is also possible and is termed as splintered authority.

In order to develop departmentation in an organization, it is important to group activities for the accomplishment of goals. Further, the manager of each sub-division must have the authority to oversee its activities. According to the Principle of Functional Definition,

If a position or department has a clear definition of the:

Then, the individual or the department can contribute more efficiently towards achieving the organization’s goals.

According to the Scalar Principle, if the line of authority from the topmost manager in an organization to every subordinate position is clear, then it will result in more responsible decision-making and communication.

In other words, subordinates must know who delegates authority to them and whom they should approach when matter go beyond their authority.

The principle of Unity to Command

According to the principle of unity to command, if an employee has a single supervisor, then there is a lesser chance of conflict in instructions. Further, the employee will feel personally responsible for the results.

Therefore, except in the case of a splintered authority, one senior must provide instructions to a subordinate.

Q1. What are the three primary barriers to delegation?

The three primary barriers to delegation are the fear of loss of power, certain personal attitudes, and the lack of the ability to direct well.