A word is a unit of language that people who speak the language can refer to as a separate and specific unit of meaning. Languages are made up of words. You must like words since you are here, on this word site.

You must have heard people say, “I gave my word to sister Matilda.” or “Word is that the restaurant is a great one.” When you give your word you are actually making a promise to someone, like a pledge. And if you share a word about something, you are actually giving out your opinion about it. If your friend asks if she looks fat or funny, you may want to word your response with utter care to watch your words. So you can see how a word can take many meanings and forms. Let’s dissect the word more.

In a unit of people who speak the language, one can identify “words are the blocks from which sentences are made” Example: “he hardly said ten words all morning” 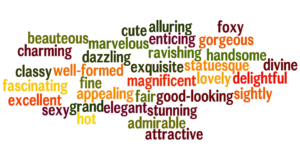 “Charge!” Yelled the commander to his battalion.  A word is used to show the exchange of views on some topic. In other words a discussion or a give-and-take. “We had a word or two about it.”

A word is a string of bits stored in computer memory “large computers use words up to 64 bits long”. We use words to articulate, formulate sentences. Words give voice to a phrase, give expressions to a phrase.

Q. Find the meaning of the underlined word. It takes roughly 4000 pounds of petals to make a single pound of rose oil.