A 5% solution of ammonium chloride when mixed with water gives a pH of 4.6 to 6. This inorganic compound is highly soluble in polar solvents, especially water. Ammonium chloride can also be formed as a result of the reaction between ammonium sulfate and sodium chloride. It is useful in veterinary medications. This compound helps in the prevention of urinary stones in animals like goats, sheep and cattle. 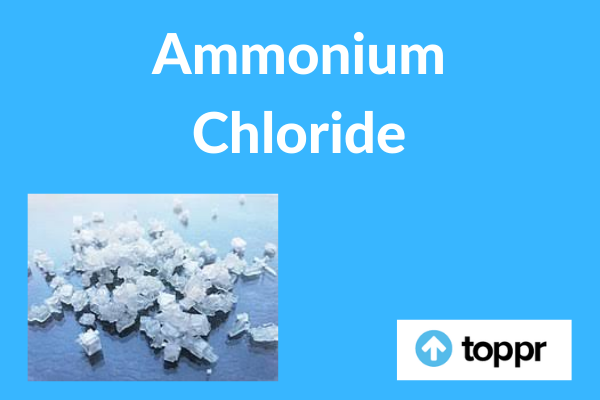 The commercial production of ammonium chloride is done by combining ammonia with hydrochloric acid. It also gives the same reaction with hydrogen chloride gas.

The compound of ammonium chloride naturally occurs in regions witnessing volcanic activities. It is found on the volcanic rocks located near the fume-releasing vents. These vents are fumaroles. The crystals of the compound directly deposit from the gaseous state. These crystals tend to be short-lived because they dissolve easily in water.

For the preparation of pure ammonium chloride, pure diluted hydrochloric acid and pure ammonium hydroxide are combined. One part of ammonium hydroxide reacts slowly with 2 parts of hydrochloric acid along with the constant stirring of the solution. This solution is then heated until the crystallization process starts. The ammonium chloride crystals appear and then they are dried and cooled separately.

By this method, we obtain pure ammonium chloride. Pure ammonium chloride crystals are colourless or white salts. This salt is soluble in 3 parts of water at a temperature of 150 C. This compound is nearly insoluble in alcohol. We need to stop heating once granulation starts. Otherwise, strong heating leads to decomposition. Decomposition produces ammonia and hydrochloric acid again.

Ammonium chloride is majorly useful as a source of nitrogen for various kinds of fertilizers like chloro-ammonium phosphate. Rice and wheat are the crops that are mainly fertilized this way in Asia.

Ammonium chloride was also useful in the pyrotechnics industry in the 18th century. But it was replaced by less hygroscopic and safer alternative chemicals. It fulfils the purpose of providing a chlorine donor to improve the green and blue colours in the flame of copper ions.

It is also useful to provide white smoke signals. But it readily performs double decomposition reaction with potassium chlorate. This generates highly unstable ammonium chlorate making its use very dangerous.

The compound of ammonium chloride also acts as a flux in the preparation of metals that are to be coated by tin or undergoing galvanization.

Q.1. What role does ammonium chloride play in archaeology?

Ans. The vapours of ammonium chloride are deposited on the fossils. This leads to the formation of a white inert layer of tiny crystals. These are fairly harmless crystals which can easily be removed. This helps to cover up any sort of colouration in the fossil. If this layer is lighted at an angle, it immensely enhances the contrast in the photographic records of specimens that are three-dimensional in nature. This technique is also useful to eliminate reflection on the glass and to provide similar specimens for photographic documentation.

Q.2. How is ammonium chloride helpful in food production?

Ans. Ammonium chloride is useful as a food additive under the name of sal ammoniac or salmiak. It works as a nutrient for yeast in the process of breadmaking and also as an acidifier. Also, it is an important supplement in the cattle feed. It acts as an ingredient in the nutritive sources of yeasts and many other microorganisms. In the subcontinent countries like India, Pakistan, Tajikistan, this compound is Noshader. It is useful to enhance the crispness of local snacks like jalebi and samosa.

Q.3. Can ammonium chloride act as a buffer solution?