Anilines are an organic compound. It has a formula \(C_6H_5NH_2\) since it has 6 carbon atoms, 1 nitrogen atom and 7 hydrogen atoms. Anilines has a phenyl group attached to an amino group. Aniline is the simplest aromatic amine. Anilines are an industrially significant commodity chemical. Like other volatile amines, it has the odour of rotten fish. It ignites easily. It burns with a smoky flame characteristic of aromatic compounds.

Chemically, aniline is an electron-rich benzene derivative. As a consequence, aniline reacts rapidly in electrophilic aromatic substitution reactions. It is also prone to oxidation. Freshly purified aniline is a bit colourless oil, on exposure to air results in gradual darkening of the sample (to yellow or red) due to the formation of strongly coloured, oxidized impurities. Aniline is diazotized to give a diazonium salt. This salt then undergoes various nucleophilic substitution reactions. 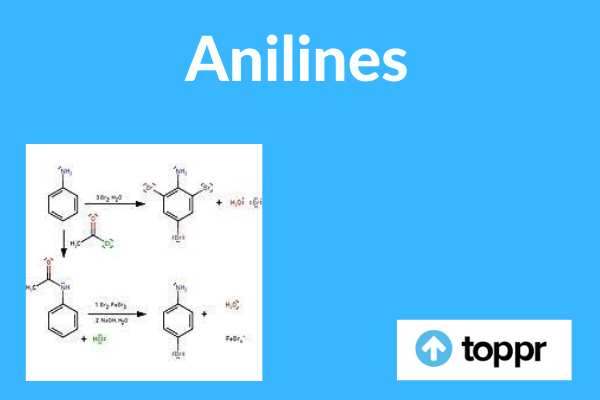 Aniline is a slightly pyramidalized molecule. It has hybridization of the nitrogen which is between \(sp_3\) and \(sp_2\). The nitrogen lone pair in the compound is in an \(sp^x\) hybrid orbital with a high p character. The amino group present in aniline is flatter in comparison with an aliphatic amine, owing to the conjugation of the lone pair with the aryl substituent.

The physical properties of Anilines are-

Question 1: What are the common uses of anilines?

Answer: Anilines are in use in various fields of science and everyday life as given below-

Oxidation Reaction- The oxidation reactions of anilines compounds lead to the formation of carbon-nitrogen bonds.

Basicity- Basicity is known that anilines are weak bases. In reaction with strong acid, it forms ions of anilinium.

Diazotization – Aniline and its ring-substituted derivatives react with nitrous acid give diazonium salts. Through these intermediates, aniline can be conveniently converted to -OH, -CN, or a halide through Sandmeyer reactions. This diazonium salt on reaction with \(NaNO_2\) and phenol to produce a dye benzeneazophenol, in a process coupling. The reaction of converting primary aromatic amine into diazonium salt is diazotisation. In this reaction, primary aromatic amine reacts with sodium nitrile and with 2 moles of HCl which ice-cold mixture because the temperature uses to be 0.5°C. It forms benzene diazonium salt as a major product with water and sodium chloride.

The other reactions include N-alkylation reaction, hydrogenation, Wohl-Aue reaction, etc.

Share with friends
Previous
CaCO3
Next
Importance of Hydrosphere