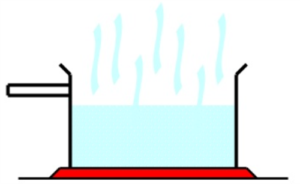 Evaporation takes place when a liquid turns into a gas. Evaporation is also known as vaporization. Vaporization usually happens on the surface of the water. It is a slow process and occurs at all temperatures. For example, wet clothes take a lot of time to dry due to the slow rate of vaporization. Water bodies with larger surface tend to evaporate quicker.

For example, water spilt on a small part of the floor takes a long time to evaporate whereas, water spilt on the entire floor dries up rapidly. The vaporization rate also depends on the type of the liquid, its density, etc. Liquids like spirits, petrol, and kerosene evaporate quicker than water. Vaporization also depends on factors like temperature, humidity, pressure, wind speed, and surface area.

Particles take in energy from the surroundings during the process of vaporization. This absorption makes the surroundings cooler than before. For example, if you put acetone on your palm, you will feel a cooling sensation on your palm. Heat is absorbed from your palm by the particles, thus, your palm feels cool.

It has also been noticed that the temperature of the fresh tap water is higher than water kept in an open vessel. Only molecules with high kinetic energy can escape during the process of vaporization.

Browse more Topics under Matter In Our Surroundings

The main factors that have an effect on vaporization are as follows :

Evaporation increases with an increase in the surface area

If the surface area is increased, then the amount is of liquid that is exposed to air is larger. More molecules can escape with a wider surface area. For e.g. We spread out clothes to dry. We do that because that speeds up the process of vaporization.

Evaporation increases with an increase in temperature

The water molecules move rapidly when the water is heated. This makes the molecules escape faster. Higher temperatures lead to increase in vaporization as more molecules get kinetic energy to convert into vapor. For example, boiling water evaporates faster than fresh tap water.

Evaporation increases with a decrease in humidity

Humidity means the amount of vapor present in the air. The air around can only hold a certain amount of vapor at a certain time and certain temperature. If the temperature increases and the wind speed and humidity stay constant, then the rate of evaporation will increase since warmer air can hold more water vapor than colder air.

Evaporation increases with an increase in the speed of wind

Particles of vapor move away when the speed of wind increases. This leads to a decrease in the amount of water vapor in the atmosphere. For example, we use hand dryers to dry our hands. Here the wind is expelled from the hand dryer which dries our hand.

Learn about the Characteristic of Particles of Matter here.

Q. What is the synonym for Evaporation?

Sol: The synonym for evaporation is vaporization.

Share with friends
Previous
Introduction and Physical Nature of Matter
Next
Can Matter Change Its State?