The temperature may be lower if super-cooling occurs. If there are impurities present in the water which may cause depression in freezing point. This article will explain the cooling behaviour of water.

The freezing point of water is zero degrees Centigrade or 32 degrees Fahrenheit. Rather, we can say that zero degrees are the point at which water is melting at the same rate it is freezing. Hence, creating a balance. Actually, at zero-degree water molecules are moving very slowly, and formation of solid begins i.e. Ice. 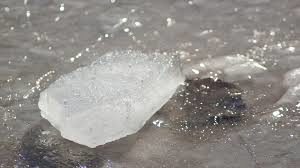 After reaching an equilibrium at zero degrees, the ice, undisturbed, will remain ice. But, if any foreign substance is added to the ice like salt, then the water molecules can’t attach to form ice as quickly.

Hence in this way, the freezing point i.e. ice formation rate lowers. But it doesn’t affect its melting rate. Thus ice is forming less quickly, with the salt disturbing the process, and melting is continuing. Water starts melting before it can form more ice.

Actually the zero points of the Fahrenheit scale i.e. -17.8 °C is defined as the freezing temperature of a saturated solution of salt water. So zero degree Fahrenheit is the lowest temperature to which you can lower the melting point of water with salt

Salt is Not the Only way to lower the freezing point. Alcohol and sugar are among many other common substances, will have the same effect. We use salt to help melt ice on the journey in hill areas because it is cheap and abundant.

One of these is by using electricity, and the other is by adding alcohol or testosterone. Such methods will work only with pure water.

Adding alcohol to the water changes its behaviour. When the water cools, alcohol forms ice-like hexagons. Then water droplets coalesce around all of these, rather floating freely around each other.

This hexagonal structure provides the same type of stability as due to solid impurities. By adding the alcohol, scientists have found they can raise the freezing point of pure water to 0 °C.

We can also use electricity to raise the freezing point of water. Israeli scientists tried a different approach to raising the temperature by using electricity.

Q. Does water have the same freezing and melting points? Explain.

The melting point of any substance depends largely on the standard atmospheric pressure while pressure only has a little effect on a substance’s freezing point.