Steam distillation is a separation process which purifies isolate temperature-sensitive materials, such as natural aromatic compounds. In steam distillation, dry steam is passed through the plant material. These vapours undergo condensation and collection in receivers. 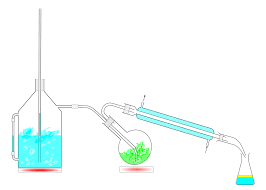 Steam distillation is the process by which we can extract oil from plant matter. In the apparatus, there is a chamber with holes in the bottom for steam to come through with either fresh or dried herbs.

It consists of a lid that keeps the oil from diffusing into the air when the steam is applied to it. We can collect the water and oil droplets which had undergone condensation. Then the separation of water and oil takes place by passing through a filter.

When a mixture of two immiscible liquids (e.g., water and organics) is heated and agitated, the surface of each liquid exerts its own vapour pressure as though the other component of the mixture was absent. Here an individual constituent on its own extracts vapour pressure independently. Vapour pressure of the system increases consequently.

The two immiscible liquids start to boil when the vapour pressure of these liquids outplace the atmospheric pressure. Many organic compounds are insoluble in water. At an absolute temperature, we can purify that is below the point where these compounds decompose.

The principle behind the steam distillation process is that when the heating of a mixture of two or more immiscible liquids takes place, the vapour pressure exerted by the system increases.

This is because it now becomes the sum of the vapour pressures of all of the components of the mixture combined together. This allows for evaporation of elements with high boiling points at much lower temperatures merely by allowing them to form a mixture with water.

Extraction Procedure- In the extraction process, the steam passes through the organic matter that contains the compounds for separation. The steam condenses and forms a mixture of steam and matter.

This mixture gets heated further by passing more steam, which continues to pass through the matter, evaporating the mixture. Due to the reduced vapour pressure, the required organic compounds evaporate as a part of the mixture. Moreover, its extraction takes place from organic matter.

This collection of the mixture takes place and it settles down for separation. When the settling process occurs, the extracted organic compounds come to the top. Their separation takes place by filtering out the water from below.

Advantages of steam distillation are: