Characteristics of the Compounds of the Alkali Metals

All alkali metals form various oxides, hydroxides, carbonates and nitrates. They are hence, known as the most reactive elements as they have the weakest nuclear charge in the respective period. They have the tendency to lose their one valence electron in the last shell and form strong ionic bonds with their anions. Let’s, one by one study the characteristics of the compound of the alkali metals.

The property of alkali metals allows their oxides, their peroxides and their super-oxides to dissolve in water quite readily. Such dissolving in water produces corresponding hydroxides which are basically very strong alkalis. Certain examples in the form of a chemical equation that display such phenomenon are as follows:

It will be right to say that peroxides and super-oxides act as oxidising agents since they are able to react with water to form hydrogen oxide and oxygen easily. For any hydroxide of an alkali metal, one can observe whitish crystalline solids. As a base, they are very strong and can easily dissolve in water, also emitting a large quantity of heat in the process.

Moving down the periodic table, we can observe that the basic strength of such hydroxides, tends to increase. The hydroxides of alkali metals usually behave as strong bases owing to their low ionization energies which go down in the group. This decrease in ionization energies usually leads to the weakening of the bond between the metal and hydroxide ions and M – O bond in M – O – H can easily break, hence giving M+ and OH–

This ultimately results in increased concentration of hydroxyl ions in the solution which can be defined by the increase in basic characters. All such hydroxides are very soluble in water and thermally stable with the exception of lithium hydroxide. Alkali metals with their hydroxides, being strongly basic, tend to react with all acids, leading to the formation of salts. 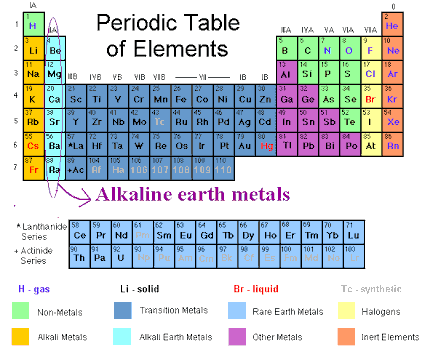 The alkali metals tend to combine directly with different halogens under appropriate conditions, thus forming halides of the general formula MX. Examples that demonstrate the formation of such halides are as follows:

(where M = Li, Na, K, Rb or Cs and X = F, Cl, Br or I). All of these halides are usually colourless, are high melting crystalline solids that have high negative enthalpies of formation.

Other Compounds of the Alkali Metals

A concentrated solution of sodium carbonate can absorb Carbon Dioxide to give sparingly soluble sodium bicarbonate. We can demonstrate this by the following chemical equation:

Quite sparingly, this happens to be soluble in water. When heated between 250°C and 300°C, it gets converted into pure anhydrous sodium carbonate which can be later used for standardising acids.

We usually call it as ‘common salt’ that occurs abundantly in nature as a rock salt or halite. The most abundant source of Sodium Chloride is sea water where sodium chloride occurs to the extent of 3 percent. The sea water is exposed to the sun and air in large shallow pits.

The gradual evaporation of water leads to the crystallization of the salt. The solution is later saturated with a current of dry hydrogen chloride whereby crystals of pure sodium chloride separate out in the process. Sodium Chloride is a colourless crystalline salt that is almost insoluble in alcohol but highly soluble in water.

It is prepared from fused carnallite that is nearly pure Potassium Chloride, separated from the melt, leaving fused MgCl2 behind. The salt is colourless in cubic crystal-like solid soluble in water. Its solubility increases in linear proportion with the temperature.

We can obtain it by strongly heating potassium chloride with concentrated Sulphuric acid. It is a colourless crystalline salt, and it is less soluble in water than sodium sulphate.

Q: Why does lithium form only lithium oxide and not peroxide or superoxide?

Ans: Due to the small size of lithium compounds, the element has a strong positive field around it. When combined with the oxide anion (O2–), the positive field around the lithium-ion restricts the spreading movement of the negative charge towards another oxygen atom and thus prevents the formation of higher oxides. This is why lithium does not form lithium peroxide or lithium superoxide and gets restricted to only lithium oxide.