You are aware of the use of lithium in batteries. Aren’t you? That means you are aware of what lithium is. No? Well, then let’s learn all about this element in this chapter. We will see how it behaves differently than the other group 1 elements. Let’s begin.

Group 1 elements in the periodic table are the Alkali Metals. The first element of group 1 is lithium. So, why does it behave so differently? Well, the small size of the element is the reason for its anomalous behaviour! Let’s see how.

Nature of the Element

Lithium is extremely electropositive in nature. This is the reason why it can form covalent bonds. The polarization behaviour of its ion somewhat in the same lines as magnesium ion. Therefore, there exists a diagonal relationship between magnesium and lithium. There are a number of reasons why this diagonal relationship exists between them. Let us look at the various reasons below.

As we move from the top to bottom in a group, the electropositive nature of the elements increases. However, when we move from left to right in a period, this nature decreases. It is because of this reason that we observe similarities in the properties between diagonal elements.

We know that the size of the atoms increases from top to bottom in a group. Because of this, the polarizing power of the element decreases. However, when we move from the left to right in a period, this polarizing power keeps on increasing. This is another reason for the diagonal elements to show similar properties. Thus, we see that lithium is a strong element that is quite similar to magnesium.

Their ions have comparable boiling and melting points. Due to its small size, the atom possesses high ionization energy. It reacts with water and liquid bromine. This forms a highly stable hydride unlike most of the other alkali metals. It is interesting to note that magnesium exhibits exactly these similar properties. 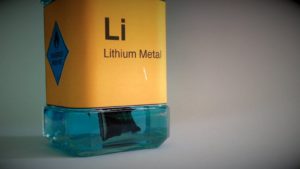 Similarities between Lithium and Magnesium

Differences between Lithium and Other Alkali Metals

Q: Give some practical applications of lithium.