Sodium and potassium salts are the better forms of  ‘common salt’. As much as it is difficult to imagine food without salts, these two elements find use in several industries. This makes them highly desired and useful elements found on planet earth. Let us get to know more about the compounds of sodium and potassium.

Compounds of Sodium and Potassium 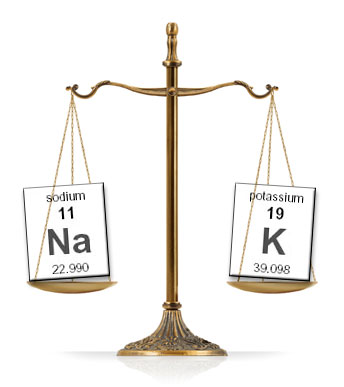 An alkali metal, Sodium belongs to Group 1. Sodium has an atomic number of 11. It usually manifests itself as a soft, white and highly reactive alkali metal. It has one electron in the outermost shell, upon losing which, it tends to form a sodium ion.  Sodium does not occur freely in nature as it is a highly reactive metal. You can store it in kerosene oil to prevent its reaction in the atmosphere and with the air. It mainly consists of three minerals such as sodalite, feldspar, and rock salt.

We know the following properties of sodium:

Among the most common uses of Sodium in the human body are that it regulates the flow of water across the membrane and helps in transporting sugars and amino acids into various cells.

Potassium is an s-block element occurring in Group 1 below Sodium. It has an atomic number of 19. Hence its electronic configuration is ns1. It has one valence electron which it readily donates to accepting atoms. Hence, it forms strong ionic bonds and becomes a cation. The size of the cation of potassium is smaller than its atom since it loses its electron.

Potassium, like sodium, is a soft metal. It can be cut with a knife, It forms various compounds like salts, oxides, hydroxides, etc. Let’s study the compounds of sodium and potassium respectively now.

Some of the important compounds of Sodium are Sodium Carbonate, Sodium Chloride, Sodium Hydroxide, and Sodium Hydrogen Carbonate.

Q: Discuss the properties of Sodium Hydrogen Carbonate and its uses.

Ans: Also known as baking soda, the molecular formula of Sodium Hydrogen Carbonate is NaHCO3. Upon decomposition, it leads to the formation of carbon dioxide, which you can understand through the equation:

You can use it as an antiseptic during a skin infection or in fire extinguishers. Most bakeries also make use of this compound to prepare and preserve pasties and cakes. It has a wide use across various industries.