We are a part of a democratic society. Indian Constitution is a part of the democracy. But what exactly is the democracy? How did it come into existence? How does it work? Let’s find out more about it.

Table of content
1 Suggested Videos
2 What is Democracy?
2.1 History
2.2 How Does Democracy work?
3 Democracy in India
4 Questions For You

Democracy is a system of government in which the citizens exercise power directly or elect representatives from among themselves to form a governing body, such as a parliament. It is also referred as “rule of the majority”. Here the power can’t be inherited. People elect their leaders. Representatives stand in an election and the citizens vote for their representative. The representative with the most number of votes gets the power. 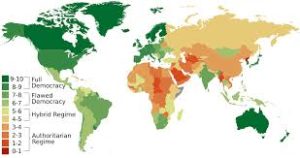 The term “democracy” first appeared in ancient Greek political and philosophical thought in the city-state of Athens during the classical antiquity. The word comes from Greek word demos, “common people” and Kratos, strength. It was established in 508–507 BC by the Athenians and it was led by Cleisthenes. Cleisthenes is also known as the ”the father of Athenian democracy”.

How does Democracy look like in the Contemporary World?

How Does Democracy work?

One of the tenets of democracy is that all members of the society must be equal. For it to function, this equality must be present in the individual vote. Denying groups the right to vote is contrary to the function of a democracy, a system of government where each individual’s vote has equal weight. The U.S. system of government is a republic, a type of democracy in which elected officials carry out the will of the people.

India is the world’s largest democracy.  India became a democratic nation post its independence in the year 1947. Thereafter, the citizens of India were given the right to vote and elect their leaders. In India, it gives its citizens the right to vote irrespective of their caste, color, creed, religion, and gender. It has five democratic principles – sovereign, socialist, secular, democratic and republic.

What are 6 Democratic Rights?

Q1. Which one of the following is a test to say whether the elections are free and fair?

Sol: The correct option is option ”d”. The ultimate test of free and fair election is the acceptance of the election results by the voters. If elections are not free or fair, the voters will not accept the results. It is logical to assume that if the elections are not free and fair, and rigging or malpractices have taken place, the ruling party should always win, as it is more powerful than the opposition.

Q2. What does Democracy imply?

Sol: The correct option is option ”c”. One person, one vote means that everyone in the country irrespective of the caste, gender and income earned is allowed to vote for his own representative and his vote is also considered important though the whole nation does not vote every time. Some countries where citizens do not enjoy the right to vote are Brunei, Oman, Qatar, Saudi Arabia, Vatican City, etc.