The Need for Operating System: Operating System is a program that acts as an Interface between the system hardware and the user making the tasks easier. It is important software which runs on a computer and controls the set of instructions and wisely utilizes each part of the Computer.

All the working of a computer system depends on the OS at the base level. Further, it performs all the functions like handling memory, processes, the interaction between hardware and software, etc. Now, let us study the need for the operating system. 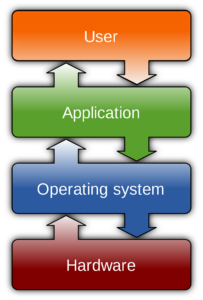 1. Interface between the user and the computer

An OS provides a very easy way to interact with the computer. It provides different features and GUI so that we can easily work on a computer. We have to interact just by clicking the mouse or through the keyboard. Thus, we can say that an OS makes working very easy and efficient.

The OS helps to operate the different input/output devices. The OS decides which program or process can use which device. Moreover, it decides the time for usage. In addition to this, it controls the allocation and deallocation of devices.

The OS helps to run more than one application at a time on the computer. It plays an important role while multitasking. Since it manages memory and other devices during multitasking. Therefore, it provides smooth multitasking on the system.

5. Platform for other application software

Users require different application programs to perform specific tasks on the system. The OS manages and controls these applications so that they can work efficiently. In other words, it acts as an interface between the user and the applications.

Some other uses/need for operating system are:

It helps in managing the main memory of the computer. Moreover, It allocates and deallocates memory to all the applications/tasks.

It helps to manage files on the system. As we know, all the data on the system is in the form of files. It makes interaction with the files easy.

It keeps the system and applications safe through authorization. Thus, the OS provides security to the system.

9. Acts as an Interface

The operating system can be of different types. They are as follows:

In this system, the OS does not forward the jobs/tasks directly to the CPU. It works by grouping together similar types of jobs under one category. Further, we name this group as a ‘batch’. Hence, the name batch OS.

When more than one task takes place on the system it is called time-shared OS. As multiple tasks can run at the system at a time as per requirement. Hence, they all share the CPU time one by one. Therefore, we also name it multitasking. The time that each task gets is called quantum.

A fixed interval of time is decided for each task. When the first task executes for that period of time, the second task executes, and so on. Examples are UNIX etc.

In this system, there is more than one CPU present. The OS distributes the tasks among all the processors. The processors do not share any memory or clock time. OS handles all communication between them through various communication lines.

In these OS various systems are connected to a server. It allows the system to share resources such as files, printers, applications, etc. Moreover, it gives the capability to serve to manage these resources.

In these systems, the time interval for processing and responding to inputs is very small. Therefore, due to this quality, these are used in real-time situations. For example in missile systems, robots, etc.

They have two categories as follows:

In this, the time constraint is very short and strict. Even seconds of delay is not acceptable.

In this, the time constraint is not so short and strict.

Q1. What is an operating system?

Q3. What is the need for Operating systems/What are the uses of the Operating System?

A3. We need an operating system for the following functions:

Q4. What is the full form of RTOS? What is its function?

A4. RTOS stands for Real-Time Operating System. This type of OS is used in real-time situations where time constraint is very strict.