What is meant by the ‘employment’ and what is its connection with the term ‘work’? Is there a difference between the two? This chapter focusses, in length, on the economic definition of work, worker, labour force, workforce, and employment. Let us dive right in.

Table of content
1 Suggested Videos
2 Economic Definition of Work
2.1 Browse more Topics under Employment
2.2 Types of Workers
3 Employment: Definition and Important Terminologies
3.1 Worker and Workforce
3.2 Sectors of the Economy
4 Solved Example for You

To understand the issues of employment, let us first understand the relevance of ‘work’. Work helps us to earn a living. But more importantly, work gives us a sense of worth to be able to do something and lends meaning to our being. It is our way of contributing to the national income of the country.

By that definition, a ‘worker’ is one who is bound by a contractual agreement or one who gets rewards from working or is self-employed. There can be different types of workers defined on the basis of certain parameters.

The term ‘employment’ refers to the state of being employed. It is the relationship between an employer and employee, usually. Employment for people varies in the sense that some of them are employed for the entire year, while the others are employed for only some portion of the year. 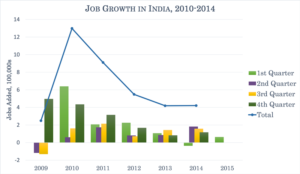 All the persons in a country who are engaged in productive activities i.e. in activities that contribute to the national product of the country constitute workforce. Statistics on the workforce reveal that 70% of the workforce is constituted in rural areas, while only 30% belong to the urban areas. Out of the rural workforce, only 26% are female workers.

In the urban areas, the figure drops to 14%. The overall female percentage of the workforce is 30%, while the remaining 70% is constituted by males. It is important to note the formula for the workforce participation ratio:

Sectors of the Economy

Based on the engagement of workers in different kinds of employment, the economy can be broadly divided into three sectors:

Question: What is worker -population ratio and what is its significance?

Answer: Worker -population ratio is the ratio of the workers who are contributing to productive activities in a country to its total population. The population figure is the total number of people residing in a country at a point of time. It is useful to give an idea about the employment situation of a country. It indicates what proportion of the population is actually contributing to the production of goods and services in the country. The ratio is usually multiplied by 100 for percentage values.