Did you know India has one amongst the highest unemployment rates in Asia? In 2017 it was at 3.4%. One of the most crucial concerns of any economy is unemployment. This lesson elaborates on the concept and calculation of unemployment rate, its causes and how it differs in rural and urban India.

Unemployment is a regularly used term and normally refers to those who are ‘out of work’. In strictly economic terms, the unemployed include all those who are able and willing to work but cannot find work. This includes the pool of persons who seek work through employment exchanges, friends, relatives and other contacts and express their willingness to get employed, owing to the lack of work. Economists define an unemployed person as one who is unable to get work for even one hour during half a day.

The three major sources of official data on employment in India include: 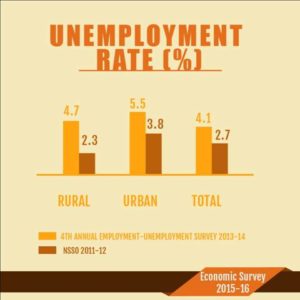 We use the following formula to calculate it:

Here, labour force refers to all those persons willing and able to engage in productive activity or work.

India has roughly 70% of its population living in rural areas. Agriculture forms the mainstay of the rural population. But, not enough employment is available for all those living in the rural areas. This leads to unemployment, which can take three forms open, seasonal and disguised.

This refers to the situation in rural areas where people who are willing and actually able to work cannot find any work.

This particularly plagues the Indian agrarian scenario. In this case, more workers than required are engaged on the farm, where not all of them are actually productively contributing to creating output. Thus, the marginal physical productivity of many workers is zero. This happens when almost the entire family engages in farm production.

The case with this is that workers remain out of work for a particular season. For example, workers hired only for the harvest season remain unemployed for the remaining part of the year. Or, if the industry itself is seasonal, workers naturally remain unemployed during the off-season.

The unemployed in the urban areas have increased considerably over the years. Normally, the number of the urban unemployed is registered with unemployment exchange boards. It can also take various forms, as under-

Those illiterate persons who are willing and able to work in factories or industries in urban areas but cannot find work fall in this category. As rural-urban migration increases, urban unemployment also does.

The most horrifying kind of unemployment is when the educated youth are unable to find appropriate jobs to suit their qualifications. With an improvement in education over time, skilled workers have increased in number but the number of available jobs has not increased correspondingly. This causes educated unemployment.

This type of unemployment takes place every time technology upgrades and the existing workforce are unable to cope with the new technology. If the skills required to meet the new technology do not match the existing skill-sets of the employed workers and they cannot adapt, they become unemployed. Upgradation is a natural process, with cyclical obsolescence as one set of technology becomes irrelevant and gets replaced by another. 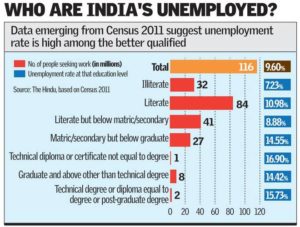 To be able to deal with the problem of unemployment, it is now necessary for you to understand its causes in a country like ours. A slow rate of economic growth would mean that the national output is not increasing by much. It indicates that not enough jobs are being created to absorb the workers able and willing to work. Put simply, labour supply far exceeds existing job opportunities.

Over-dependence on technology, domestic or foreign, has led to technological unemployment. This is because of less requirement of manual labour to accomplish tasks with greater dependence on machines and technology.

The lack of adequate fund-allocation and financial resources to curb unemployment is also leading it to rise. Proper governmental programs targeting the unemployed population, if not well-implemented, harm the employment situation of the country. Lack of committed support to deal with the job crisis causes employment to fall.

The government has a key role to play in employment generation in the country. In fact, it must persevere to increase the employment levels of the country. In the light of this, governments in the past have acted to deal with unemployment in India. The National Rural Employment Guarantee Act (NREGA) was passed in 2005. The NREGA seeks to provide 100 days of guaranteed wage employment to rural households willing to perform unskilled manual work. It makes special provisions for women and for the distance within which the job must be available to job-seekers for convenience.

State and federal governments, over the years, have played a key role in enacting other social security programmes, providing unemployment allowances and conducting training programmes and encouraging on-the-job training to absorb more skilled labour into jobs.

The government has also strived to provide direct employment in government departments and offices at various positions and levels. It also helps in indirect employment through the production of goods and services that aid the ability of the private sector to invite more job applicants and create opportunities. One of the main allied objectives of these policy programmes is the idea of poverty alleviation, with other emphases on health, nutrition, a standard of living, education, road-building, infrastructure and rural development.

Question: Sanjeev gets work for two hours a day. For the rest of the day, he is looking for work. Can you classify him as an unemployed person?

Answer: Yes, Sanjeev is unemployed. This is as per the economists’ definition of unemployment that if a person does not get employment for even one hour during half a day, he is called ‘unemployed’. Sanjeev is employed for only two hours during a day and spend the remaining part of the day looking for work. So, he can be called unemployed.

Share with friends
Previous
Algebraic Expressions
Next
Employment: Growth, Informalization and Other Issues

Why unemployment rate is inceresed

bro first go and learn the spellings of increase

Unemployment rates have increased because of the global recession of 2008. People who were going to retire postponed their retirement for more financial security. In desperation, they took jobs for which they were overqualified. These jobs were usually taken by newly grads but now as the jobs were occupied they were unemployed.

The unemployed beasts of yore
Are not bred any more;
They are a hindrance roaming around
Where mechanical beasts abound!

The unemployed brains of today
Are kindly kept at bay;
They are a nuisance hanging around
Where electronic brains abound!

We can find most populas country in Asia and have low rate of people unemployment and are exporter is many diverse product range. It’s a hint, reader may understand what I mean. Employment with huge population is achievable, population itself is not a problem. It creates immense demand to give thrust for economic activities. Other countries (technology advances, devloped countries ) sees Bharat,India as a huge market to sell their technologically produced surplus output, to get maximum wealth. Our economy is getting more and more technology driven. And economic power is going to holder of technology post liberalisation. (Import of… Read more »