Imagine a small village market where all are free to come and sell their products at whatever price they desire. There are no limitations on control of their products or the prices. This is a globalised trade. Anyone, in general context referring to any country, that can participate to set up, acquire, merge industries, invest in equity and shares, sell their products and services in India. But how does globalisation work? What are its effects on the Indian economy? Let us study in-depth about it below.

Humans have moved into a phase where everything is accessible without any difficulty. What if you weren’t able to buy goods from an online site managed by an international brand? It might make you feel angry, or irritated. The world wasn’t always open to free trade or cross-border investments. It was around two to three decades ago when the concept of ‘globalization’ was spread far and wide. This allowed nations to carry out trade and other activities in a systematic manner.

India was one of the prime nations which gained immensely post the introduction & implementation of globalization. The rise of foreign investment in the retail, corporate and scientific sectors is very much evident in the nation. For further learning about globalization and India, it is crucial to get familiar with the prime concept, that is, globalization. 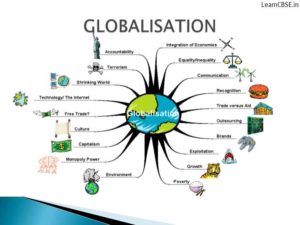 Globalization is the free movement of people, goods, and services across boundaries. This movement is managed in a unified and integrated manner. Further, it can be seen as a scheme to open the global economy as well as the associated growth in trade (global). Hence, when the countries that were previously shut to foreign investment and trade have now burned down barriers.

Considering a precise definition, countries that abide by the rules and regulations set by WTO (World Trade Organization) are part of globalization. These procedures include oversees trade conditions among countries. Apart from this, there are other organizations such as the UN and different arbitration bodies available for supervision. Under this, non-discriminatory policies of trade are also enclosed.

When we talk about globalization and the Indian economy, one name strikes our mind, that is, Dr. Manmohan Singh. He was the finance minister in the 1990s when globalization was fully implemented and experienced in India. He was the front man who framed the economic liberalization proposal. Since then, the nation has gradually moved ahead to become one of the supreme economic leaders in the world.

Below mentioned are some of the quick reactions which were felt after the introduction of globalization:

Rise in Employment: With the opening of SEZs or Special Economic Zones, the availability of new jobs has been quite effective. Furthermore, Export Processing Zones or EPZs are also established employing thousands of people. Another factor is cheap labour in India. This has motivated big firms in the west to outsource work to companies present in this region. All these factors are causing more employment.

Surge in Compensation: After the outburst of globalization, the compensation levels have stayed higher. These figures are impressive as compared to what domestic companies might have presented. Why? The level of knowledge and skill brought by foreign companies is obviously advanced. This has ultimately resulted in modification of the management structure.

Improved Standard of Living and Better Purchasing Power: Wealth generation across Indian cities has enhanced since globalization has fully hit the nation. You can notice an improvement in the purchasing power for individuals, especially those working under foreign organizations. Further, domestic organizations are motivated to present higher rewards to their employees. Therefore, a number of cities are experiencing better standards of living together with business development.

Disadvantages of Globalization in India

If we are discussing globalization and the Indian economy, then talking about the negative effects is also important. The informal sector is purposely not listed in the labor legislation. For example, informal workers aren’t the subject considering the 1948 Factories Act. This scheme covers vital factors such as common working conditions, safety, and health, the ban on child labor, working hours etc.  Also, globalization has caused poor health, disgraceful working conditions, as well as bondage, happening in different parts of the country.

Q. Do you think the impact of globalization hasn’t been uniform?

Ans. Looking at the trend and its uprising since all these years, the answer is yes! To be precise, globalization has proven advantageous to professional and skilled individuals, primarily from urban regions. The unskilled population hasn’t gained enough out of globalization. For example, industries, as well as service firms, have been supported by this scheme more effectively as compared to the agricultural sector. The rise of MNCs has been quite significant after globalization. However, small producers are bound to face tough competition.

Globalisation and the Indian Economy

Globalisation and the Indian Economy