Consumer preference is crucial to Microeconomics. Concepts such as utility, budget line, indifference curve, and indifference map sound complex at once but are easy to understand as can be. Let us understand Consumer Preference Theory to understand consumer behaviour and how consumers make choices.

Utility refers to the ability of a commodity to serve human wants. It is the amount of satisfaction a consumer gets from the consumption of a good or service. ‘Utility’ can be of two types:

Both, marginal and total utilities are measured in ‘utils’. Thus, TU = ∑ MU. And, MU = ΔTU / ΔQ can be derived from the above two definitions. You must note that since MU is the change in TU from consuming one more unit, it can also be written as: Fig.1: Example of an MU and TU schedule

The crucial point of consumer preference theory is this law. It states that as more and more of a commodity is consumed, consumers receive less and less satisfaction from its consumption. More formally, it means that the Marginal utility of a commodity declines as successive units of it are consumed. A corollary of this law is that the Total utility of the commodity increases at a diminishing rate (see table above).

To understand the relationship between MU and TU, note that: The condition for consumer’s optimum choice of two goods can be explained with the help of Indifference Curve and Budget Line. An indifference curve indicates satisfaction, while the budget line indicates affordability. A consumer would want to maximize his satisfaction from two goods subject to his budget constraint. Thus, he will want to reach the highest possible IC which falls within his budget. This can happen when: 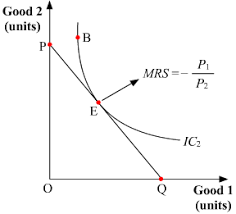 Question: Why does the Indifference Curve have a negative slope?

Answer: An Indifference Curve is a diagrammatic representation of all such bundles of two goods that give the same satisfaction to a consuPreferencesmer. Now, to have more of one good, the consumer must sacrifice some units of the other good to maintain the same level of satisfaction. Thus, more of one good implies less of the other. So, an indifference curve slopes downward from left to right.