Have you ever prepared a monthly budget? How do you decide how much of a good to buy? And do you ever change your preferences? This can be understood by the economic concept of consumer budget. The concepts of budget line, budget set and slope of the budget are explored here. Read on.

Introduction of Variables and Basic Concepts

The consumer prefers Bundle A to Bundle B.

The consumer prefers Bundle A to Bundle B.

A consumer budget is the real purchasing power with which he can purchase quantities of two goods, given their prices.

There are two factors that affect a consumer’s choice of quantities to purchase between two goods: prices and money income. Price times quantity for each good gives us the expenditure incurred on purchasing a good. In our analysis, there are two goods. So, the expenditure on both goods must be less than or equal to the money income of the consumer. This is the budget constraint faced by a consumer. It is depicted as:

All those bundles that satisfy this criterion are set to form a part of what is called the budget set. The consumer can choose to consume out of any of these bundles.

In consumer budget, the graphical representation of all such bundles which cost the consumer exactly his money income is called the budget line. The equation of the budget line is, therefore:

We measure the quantity of good 1 on the horizontal axis and that of good 2 on the vertical axis. We can depict the budget line by calculating the horizontal and vertical intercept. The intercepts are the maximum of each good the consumer can afford to buy. 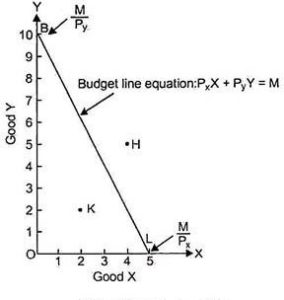 The figure assumes good 1 to be ‘X’ and good 2 to be ‘Y’. Note that a bundle such as ‘K’ forms a part of the budget set and costs less than the total money income. A bundle such as ‘H’ on the other hand lies outside the budget line and is hence not affordable.

Slope of the Budget Line

Thus, the consumer must give up units of good 2 to obtain one extra unit of good 1, i.e. the slope of the budget line is.

Question: What is a budget set? When can it change?

Answer: A budget set refers to all those quantities of two goods that a consumer can buy, given the prices of the goods and his money income. Its equation is given by:

A budget set can change when:

Share with friends
Previous
Physical Properties
Next
Variety In Fabrics