A popular alternative to the marginal utility analysis of demand is the Indifference Curve Analysis. This is based on consumer preference and believes that we cannot quantitatively measure human satisfaction in monetary terms. This approach assigns an order to consumer preferences rather than measure them in terms of money. Let us take a look.

What is an Indifference Curve?

Peter agrees to give up 6 units of clothing for an additional unit of food. Hence, we have two combinations of food and clothing giving equal satisfaction to Peter as follows:

By asking him similar questions, we get various combinations as follows: 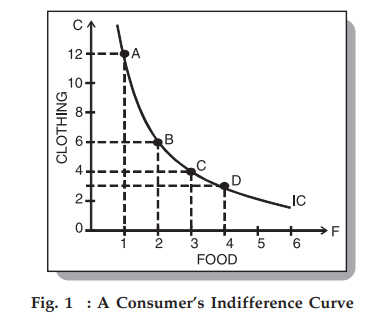 The diagram shows an Indifference curve (IC). Any combination lying on this curve gives the same level of consumer satisfaction. Another name for it is Iso-Utility Curve.

An Indifference Map is a set of Indifference Curves. It depicts the complete picture of a consumer’s preferences. The following diagram showing an indifference map consisting of three curves: 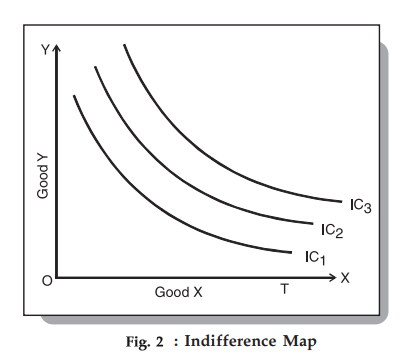 This is the rate at which a consumer is prepared to exchange a good X for Y. If we go back to Peter’s example above, we have the following table:

In this example, Peter initially gives up 6 units of clothing to get an extra unit of food. Hence, the MRS is 6. Similarly, for subsequent exchanges, the MRS is 2 and 1 respectively. Therefore, MRS of X for Y is the amount of Y whose loss can be compensated by a unit gain of X, keeping the satisfaction the same.

Interestingly, as Peter accumulates more units of food, the MRS starts falling – meaning he is prepared to give up fewer units of clothing for food. There are two reasons for this:

Properties of an Indifference Curve or IC

Here are the properties of an indifference curve:

An IC slopes downwards to the right

This slope signifies that when the quantity of one commodity in combination is increased, the amount of the other commodity reduces. This is essential for the level of satisfaction to remain the same on an indifference curve.

An IC is always convex to the origin

From our discussion above, we understand that as Peter substitutes clothing for food, he is willing to part with less and less clothing. This is the diminishing marginal rate of substitution. The rate gives a convex shape to the indifference curve. However, there are two extreme scenarios:

Indifference curves never intersect each other

Two ICs will never intersect each other. Also, they need not be parallel to each other either. Look at the following diagram: 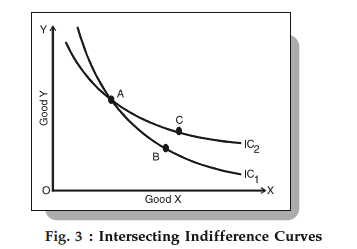 A higher IC means that a consumer prefers more goods than not.

An IC does not touch the axis

This is not possible because of our assumption that a consumer considers different combinations of two commodities and wants both of them. If the curve touches either of the axes, then it means that he is satisfied with only one commodity and does not want the other, which is contrary to our assumption.

Since a higher indifference curve represents a higher level of satisfaction, a consumer will try to reach the highest possible IC to maximize his satisfaction. In order to do so, he has to buy more goods and has to work under the following two constraints: 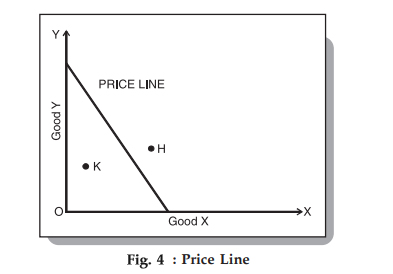 As can be seen above, a budget line shows all possible combinations of two goods that a consumer can buy within the funds available to him at the given prices of the goods. All combinations that are within his reach lie on the budget line.

Do you also want to know Consumers Equilibrium?

Q: What are the assumptions underlying the indifference curve approach?

Ans: The assumptions are as follows,