The English language contains a lot of difficult and puzzling kind of words. One of the kinds of words are homophones like brake and break. They have the same pronunciation but their meanings and spellings are different. When we talk about a break, we see that this word has many centuries behind it. You will find it in all the old Germanic languages as well. However, the term brake is only a few hundred years old. In other words, its origin lies at the end of the 18th century. Thus, we will study brake vs break in this article to understand the differences between these terms.

As these two words are so close in their spelling and identical in their pronunciation, it makes it all the more important to use them correctly. Thus, we will help you in not mixing up these words. After going through their definition, differences and uses, you will be able to understand them better. 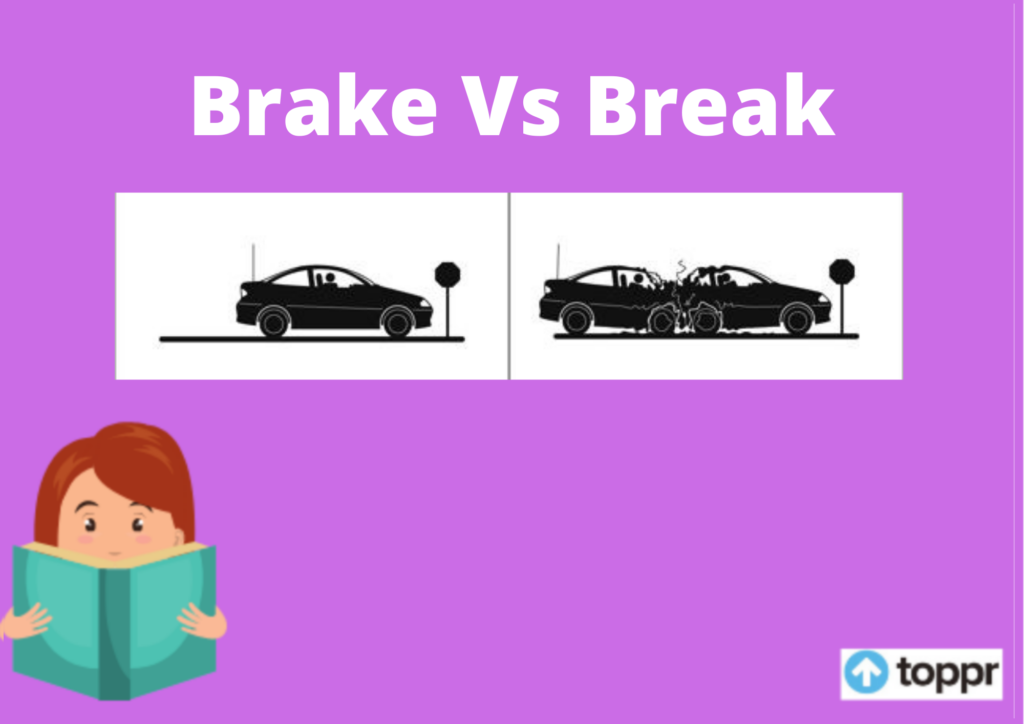 Difference Between Brake Vs Break

We will start by learning the meaning of the terms, brake and break. Brake is basically a device which helps in slowing down or stopping the movement of a vehicle or machine. We use it in the plural form generally when we refer to modes of transportation.

On the other hand, the break is a word with many meanings. The most common one being splitting into pieces, making unusable, getting rid of, and interrupting. Similarly, it also means an opportunity.

To remember the difference between brake vs break, one must remember this little tip. Take the word breakfast and you will see that it comes from two words break plus fast. It means you break your fast. Thus, this will help you keep the meanings separate when using.

When/How to Use Brake

Brake is a noun which we use to refer to a device which helps slow down or stop the movement of a vehicle or machine. When using for a transportation mode, we will use it in plural form like her brakes went out.

Further, we also use it as a verb. The most common use of brake is when we refer to our car. It is the device which stops your car from a moving position. Similarly, when you use it to stop your car, we call it braking.

For instance, I always forget to apply the parking brake. Now, let us take a look at the incorrect and correct use of brake vs break:

Incorrect: Another driver cut me off so I had to break suddenly.

Correct: Another driver cut me off so I had to brake suddenly.

When/How to Use Break

As a noun, a break has a lot of meanings which include a fracture, an interruption, a pause, sudden move, an escape and also an opportunity. Further, it also has many meanings when we use it as an irregular verb like splitting into pieces, makes unusable, disrupt, or get rid and to interrupt.

All in all, the central meaning of break it to interrupt the continuity. The transitive verb will be she broke the vase and intransitive will be the vase broke due to her mistake. As a noun, we use it to mean an act of breaking like we should take a break now.

Now, let us take a look at the incorrect and correct use of brake vs break:

Incorrect: I don’t think you should trust him because he will brake your heart.

Correct: I don’t think you should trust him because he will break your heart.

Examples of Brake – Using Brake in a Sentence

Examples can help you get a clearer idea of the word. Further, it will make your understanding of the word easier and better. So, let’s take a look.

Examples of Break – Using Break in a Sentence

We will now take a look at some sentences including the word break to understand its meaning and usage in the correct manner: