Many people face a great deal of confusion when it comes to the two words- emigrate vs immigrate. First of all, people must realize that both words refer to a permanent move. Furthermore, emigrate means leaving one’s home country. In contrast, immigrate refers to making a move to a new country. Both words have involvement of the word migrate and have the same Latin origin, migrare.

Moreover, the word migrare means moving from one place to another place. Most noteworthy, the difference between these two words is a matter of perspective. Emigrate is a word that looks at leaving. Also, the prefix e in this word means away. In contrast, immigrate pertains to entering the new country. Furthermore, the prefix im in this word means into. 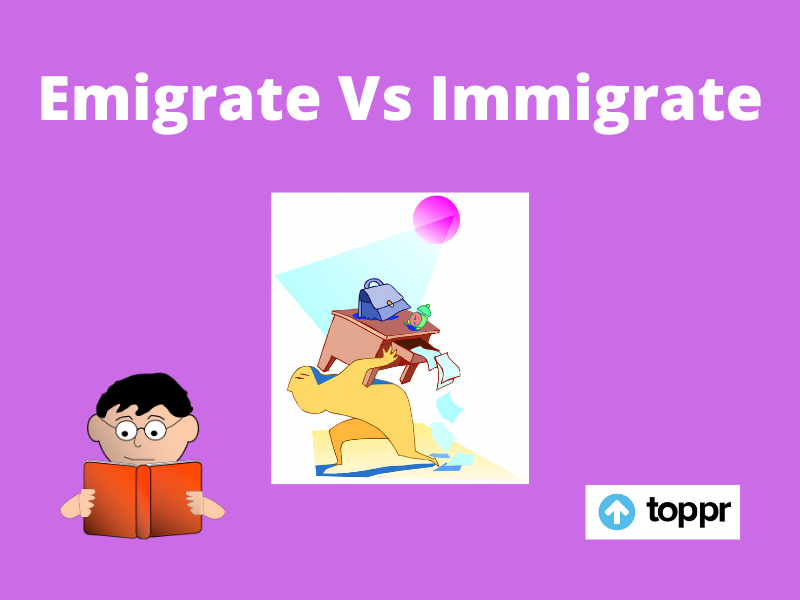 Difference Between Emigrate and Immigrate

To bring clarity into the difference between emigrate vs immigrate, it would be better to discuss some more details. Most noteworthy, students must realize that the word migrate is not an alternative to immigrate. Moreover, both these words are quite different from each other.

In contrast, immigrate mean to settle in a country where the individual was not born. As such, an individual is said to immigrate if he lives in the United States but his place of birth was India. Moreover, this also clearly brings out the difference between emigrate vs immigrate.

The beginning of the word immigrate is with the letter I. Furthermore, if the association of I takes place with “in,” one can easily remember that immigrate involves moving into a different region or country.

The beginning of the word emigrate is with an E. So, if its association takes place with exit, one would be able to remember that it means leaving or exiting one’s home country.

When/How to Use Emigrate

When/How to Use Immigrate

Examples of Emigrate – Using Emigrate in a Sentence

Below are the examples of using emigrate in a sentence. These examples will certainly improve the English grammar skills of students.

Example 1: Political differences led many individuals to emigrate to Rhode Island. This example is certainly a proper use of the word emigrate.

Example 2: The tribe lost the battle and was forced to emigrate to the desert.

Example 3: Sam made a decision to emigrate to Canada when it became convenient for him.

Examples of Immigrate – Using Immigrate in a Sentence

Take a look at the various examples of using immigrate. Learning from these examples, the students will be able to use this word appropriately in sentences.

Example 1: Many individuals resort to crossing the border illegally when they are denied permission to immigrate.

Example 2: Arthur was forced to immigrate to another country in order to escape religious persecution. This example beautifully brings out the use of the word immigrate.

Example 3: Mark is happy in Canada and has no plans to immigrate elsewhere.