English speakers are often confused regarding the words imply vs infer. They fail to understand the difference between imply and infer. Simply speaking, people imply something by what they say. In contrast, people infer something from what some individual says. Therefore, the main difference between these two words is with regards to a speaker and listener.

As such, a speaker can imply a certain thing, while a listener can infer only. When someone implies, their message contains the suggestion. On the other hand, when someone infers, the suggestion is taken out of the message. Furthermore, to imply something means to suggest that thing indirectly. Infer relates to the receiving end of imply. Also, to infer means to deduce, gather, or figure out.

The words imply and infer happen to be opposites. This is an important point to keep in mind while discussing imply vs infer. Furthermore, imply means hinting at something, but infer means making an educated guess at something. 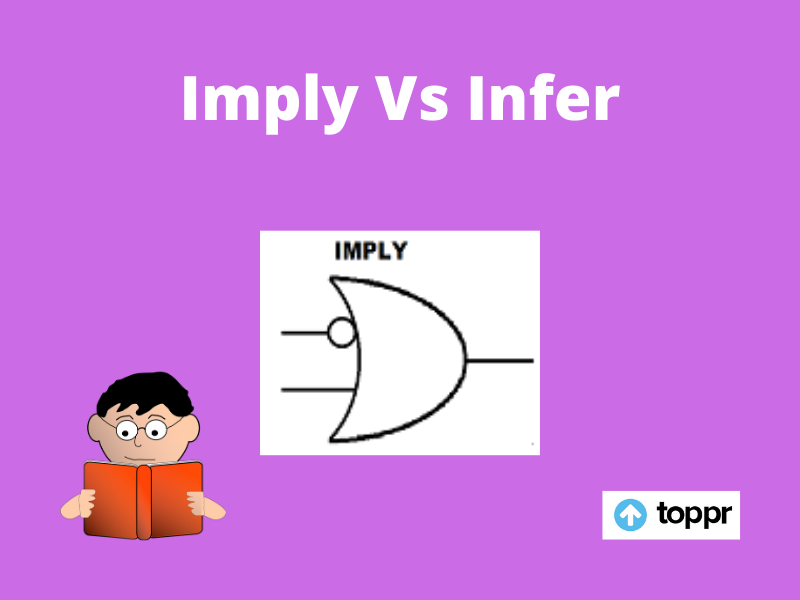 Difference Between Imply and Infer

Implying and inferring are common aspects of any communication process. Furthermore, one aspect means to state while the other means to provide a conclusion. However, it is indeed very easy to confuse between these two words.

When people imply something, they hint at it but they don’t say it directly. In contrast, infer is when some individual comes to a conclusion on the basis of something which the individual interprets as what the other person implied.

When people imply something, there is a meaning regarding what those people are saying or projecting. Moreover, this may be understood by another individual but its communication does not happen in a direct manner.  When someone says “The roof is wet,” the individual is trying to imply that listener must repair it.

Sometimes, people may argue regarding what they say versus what they imply. Furthermore, a person may say, “I have certainly not said that!” and the listener says, “But you certainly implied it!” Therefore, it is a possibility that one may say something but its interpretation may not be according to the intention or desire of the speaker.

When people infer something, they go to the communication’s receiving end. Furthermore, infer is when the expression of something takes place such that one finds a certain hint in it, or one finds some hidden meaning in it.

An important point to note is that both imply and infer are crucial to communication.  This is because it would be uncomfortable to actually say everything that people intend. Therefore, people show trust in the ability of the listener to understand the information one is trying to imply or to infer information.

For example, a person says “My flight leaves at 3:00 a.m., I will set alarm for 1:00 a.m.,” Here, this person is trusting the listener to understand and interpret the connection between these two statements.

When/How to Use Imply

Now let us see how to use the word imply in a sentence. Furthermore, this also makes clear the matter of imply vs infer.

When/How to Use Infer

The correct and incorrect use of the word ‘infer’ will help clarify the matter of imply vs infer further. This way student will understand how to properly use infer in a sentence.

Examples of Imply – Using Imply in a Sentence

Below are some examples of the word imply. Furthermore, these examples will help students understand imply vs infer.

Example 1: I didn’t mean to imply that your communication skills are poor. Furthermore, this example shows a case of unintentional implying.

Example 2: All furniture experts imply that repairs are possible for this desk.

Example 3: The term “migration” was not meant to imply a restriction to the entry of people from certain countries.

Examples of Infer – Using Infer in a Sentence

Below are some examples of the word infer.

Example 1: You must not infer that farming women lack common sense or mental ability.

Example 2: Professor Harrison can infer feelings by looking at paintings. Furthermore, this example shows the role of feelings during inferring.

Example 3: One can probably infer from reports the poor performance of the company.