English speaking is comparatively easier to do and also comes with its own set of perks. However, there are many downsides to it too as you keep doubting yourself whether what you are saying is right or wrong. As the language has many variants in different countries, it tends to get confusing for English Language speakers. An example of this confusion often arises when we talk about learned vs learnt. Both of them are the past tense of learn, but it is important to use them correctly at the right time. The main difference between these two terms is of their acceptance in the region.

In other words, the United States and Canada usually accept the spelling of learned. Whereas, the rest of the world prefers to use the term learnt. We use both of them as the past participle and past tense of the verb learn. While both of these terms are accepted generally, British English uses learnt more when we compare its usage in American English. Thus, you see that we need to understand their differences to ensure that we are making correct use of learned vs learnt. 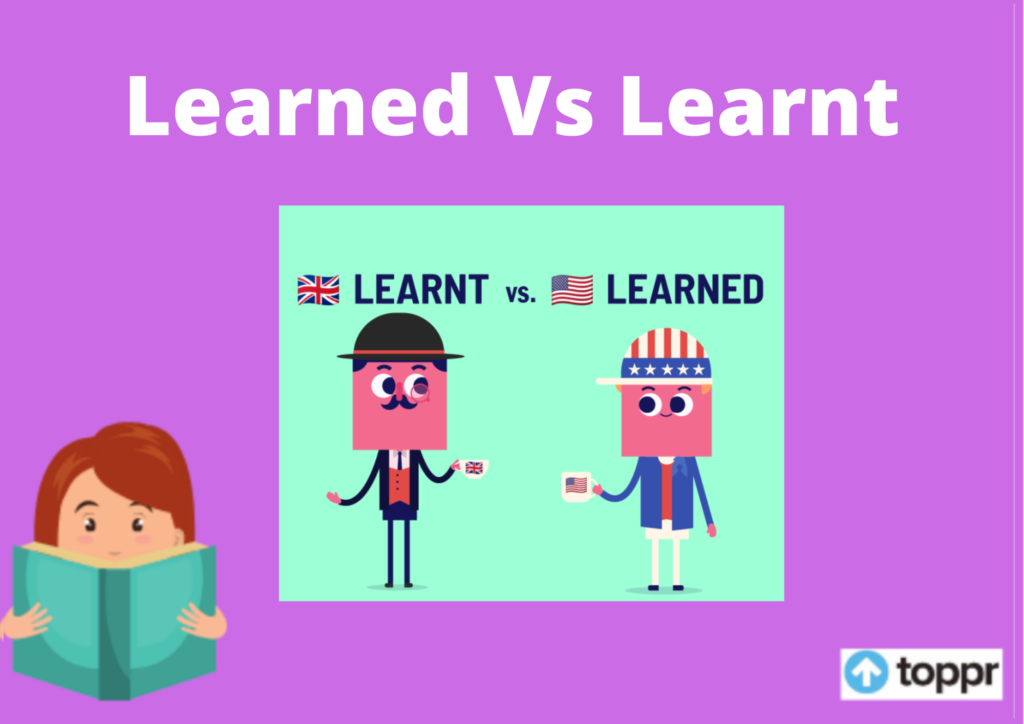 Difference Between Learned Vs Learnt

First of all, when we say that we have learned something or learnt something, it means the same thing. That is to say, it refers to the process of finding out, acquiring, or to retain knowledge or information. So, basically, the difference is of the way one spells it which shows where you are from.

They are both used as the past participle and past tense of the verb to learn. Thus, when you write anything containing any of the terms based on your origin and preference, make sure to stick with one throughout the writing. This is something to keep in mind relating to learned vs learnt.

We use learned as a verb as well as an adjective. However, we only use learnt as a verb. For instance, one may have learned or learnt the important dates of history but one cannot be a learnt person. In that case, it is a learned person.

When/How to Use Learned

We can use learned as an adjective or a verb. So, when we use it as an adjective, it will be a synonym of knowledgeable. Further, we also use it to describe a person who is highly educated.

When we use learned as an adjective, we pronounce it with two syllables. The first one being stressed upon as we do in the word perfect. Thus, when you say learned it sounds like ler-ned.

Further, learned is also the past tense form of the verb learn. It refers to acquire knowledge. Let us take a look at the correct and incorrect use of learned vs learnt to understand it better:

Incorrect: When I became a learnt woman, I saw things differently.

Correct: When I became a learned woman, I saw things differently.

When/How to Use Learnt

Learnt is also the past tense of learn. To remember its pronunciation, it rhymes with burnt. We use it only as a past tense verb and that too in British English. For instance, when you say your sister learnt maths at university.

Thus, we use it when we want to talk in the past tense using the term learn. It is better to use learnt in situations where you have already done the thing. Make sure to use it when following British English and not the word learned.

Further, one must also understand that it can be used as a verb only and not an adjective unlike learned. Let us take a look at the correct and incorrect use of learned vs learnt to understand it better:

Incorrect: Jessie learned to play the guitar to pursue a career in it.

Correct: Jessie learnt to play the guitar to pursue a career in it.

Examples of Learned – Using Learned in a Sentence

In order to understand the use of this word, we will go through some sentences to make it clear.

Examples of Learnt – Using Learnt in a Sentence

We will take a look at sentences containing the word learnt so that you can use them without any confusion in the future.