What is a Pronoun? How are the pronouns different from the nouns? And what are the various kinds of pronoun? It’s good to know these answered if you don’t. So, let’s find out more about pronouns in the section below.

What is a Pronoun?

Ever questioned and failed to understand the meaning of a pronoun? Well, a pronoun is a word which is used in place of a noun, that is, it cannot be used until the noun has been used or mentioned. In other words,

Pronoun means for a noun. 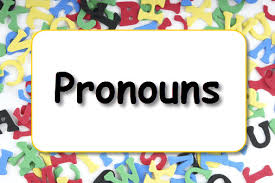 There are ten different kinds of Pronouns :

Though basically Pronouns, my, our, your, his, her and their are Possessive Adjectives for their function.

There is another type of Pronoun called Impersonal Pronoun (e.g. ‘it’). A few sentences showing the use of these pronouns:

Demonstrative Pronouns are used to point out the objects to which they refer. For example- These books are not as interesting as those books.

In order to refer to persons or things one at a time, Distributive Pronouns are used. For example- Each of the boys is healthy.

Q1: Choose the appropriate Pronouns from the brackets and complete the sentences: