In view of the coronavirus pandemic, we are making LIVE CLASSES and VIDEO CLASSES completely FREE to prevent interruption in studies
English > Pronoun > Relative Pronouns

By now you might know what personal and impersonal pronouns are. But do you know what are relative pronouns? How can we recognize them? How are these pronouns classified? Let’s find out more about them in the section below.

Introduction to Pronouns
Personal Pronouns and its Types
Relative Pronoun

Relative pronouns are also known as ‘linking pronouns’ as they link the dependent relative clause of a sentence to its main clause. 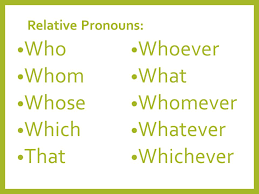 Let’s read some examples of the following pairs of sentences and observe how these are joined with the help of relative pronouns:

It can be written as – I know the girl who came from Mumbai.

It can be written as – This is the book which belongs to my grandmother.

This can be written as – This is the rat that was caught by a cat.

It can be written as – It is you who are to be blamed.

The nouns and pronouns immediately before the relative pronouns are called the antecedents. Here, ‘book’, ‘rat’, and ‘you’ are antecedents.

How to recognize them?

We can find them in the middle of a sentence to join two sentences by denoting a relation to the antecedent, like who, whose, whom, which, that. For example, this is the boy who stood first.

Relative pronouns can be classified as follows:

Q1: Fill in the blanks with appropriate Relative Pronouns.

Q2: Join the pairs of sentences with the Relative Pronoun :