In view of the coronavirus pandemic, we are making LIVE CLASSES and VIDEO CLASSES completely FREE to prevent interruption in studies
English > Pronoun > Demonstrative, Indefinite and Distributive Pronouns

Pronouns are one of the most basic parts of English grammar. Do you know what are the various types of pronoun? And what exactly is a pronoun? Let’s find out more about demonstrative, indefinite, distributive, and other types of pronoun.

Introduction to Pronouns
Personal Pronouns and its Types
Relative Pronoun

A pronoun is a word used instead of a noun or noun-equivalent, where, pronoun = pro (instead of) + noun. Pronoun means for a noun.

There are ten different types of Pronoun:

We use demonstrative pronouns to point out the objects to which they refer. For example, 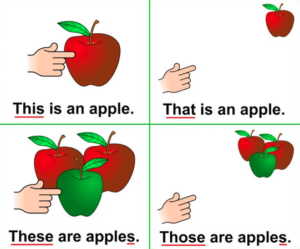 We use Indefinite Pronouns in order to refer to persons or things in a general way, not to refer to any particular person or thing. Some examples are:

In referring to anybody, everybody, everyone, anyone, each, etc. the Pronoun he or she, his or her is used according to the context.

But when the sex is not determined from the context, we use pronouns of the masculine gender.

But we cannot use his or her in case of ‘one’:

We use distributive pronouns in order to refer to persons or things one at a time. For this reason, they are always singular –

Note 1: Either means the one or the other of the two. Neither is the negative of either.

Note 2: The pronoun each may have three positions:

The third order is usually placed after a numeral.

Note 3: In the following sentence each, either, and neither are adjectives, not pronouns.

Q: Fill in the distributive pronouns and demonstrative pronoun and Indefinite Pronoun in the following: