You already know what ‘subject’ and ‘verb‘ are in a sentence. ‘Subject’ is a noun or pronoun that tells us what the sentence talks about and ‘verb’ represents the action in the sentence. Then what is ‘subject verb concord/agreement’? It means that the subject and verb in a sentence should agree or match, otherwise the sentence will not sound right. Let’s understand the basic rules of subject-verb agreement.

The verb and subject must agree in number (singular or plural) 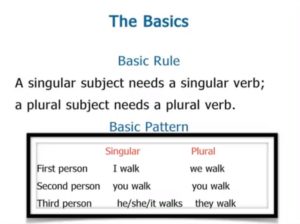 The number of the subject (singular or plural) will not change due to words/phrases in between the subject and the verb.

The verb in a sentence containing ‘or’, ‘either/or’, ‘neither/nor’ agrees with the noun or pronoun closest to it.

When the subject is followed by words such as ‘as well as’, ‘along with’, ‘besides’, ‘not’ etc. ignore them and use a singular verb if the subject is singular.

In sentences that begin with ‘here’, ‘there’, the true subject usually follows the verb.

In sentences that include sums of money, periods of time or distances etc. (as a unit), use singular verbs.

In the case of collective nouns such as ‘group, ‘population’, ‘family’, in a sentence, the verb can be singular or plural depending on their use in the sentence.

Nouns such as ‘mathematics’, ‘civics’, ‘news’ etc. while plural in form, are singular in meaning and use singular verbs.

In sentences that express a wish, request or contrary to fact, the word ‘were’ is used instead of ‘was.

Solved Examples for You on Subject Verb Concord

Question: Choose the correct subject verb combinations in the sentences below.