The game of basketball has truly become global in the last few years. The game is currently popular in the United States. Also, it is described by many as an American game because of the fun and competitive element in it. Also, this is one of the games which is played indoors and still caters to billions of fans around the world. This game was Dr. James Naismith from Canada. Initially, he invented the game by using a rectangular pitch which was 6 feet wide and 4 feet high. Additionally, the court includes a free throw line which is 12 feet long. In basketball essay, students will get to know about the different components that make the game of basketball special. 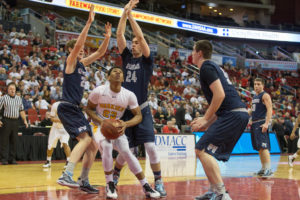 Originally, basketball was played using a soccer ball. Also, it was James Naismith that used a peach basket which ha ad a nonhollow bottom. So, this basket was nailed at a height of 10 ft. above the ground and on an elevated track. If you consider the manual removal of the ball from the basket a drawback then the bottom was removed to and it took the shape of modern-day baskets. Also, dribbling was not part of the game initially. Eventually, it evolved till 1950 by which the balls got better shape due to manufacturing.

Additionally, the orange ball was evolved from the brown ball. The brown ball was used in the beginning as it was thought that the ball is more visible. By 1996, the peach baskets used were replaced by metal hoops on the backboard.

At the start of the game, a referee tosses the ball at the center of the court between two players. One player from either team try to get their hands on the ball and the ball is passed on to the teammates. For scoring a point, a team needs to shoot the ball through the basket. If a shot is scored from a distance that is closer to the basket than the 3 point line than it fetches 2 points. Also, if the ball is shot from the distance behind 3 point line, it fetches 3 points. So, the team that has a maximum number of points is declared the winner.

In case of a draw, there may be additional time allotted to both the teams. In the game, a player is cannot move if he is holding the ball. The player needs to dribble, otherwise, it is considered as a foul. Likewise, when there is a physical contact that affects the other team then it counted as a physical foul.

Basketball is game played with a maintained and carefully marked court. It is a team sport that is commonly found in many different areas.