Droughts refer to conditions when particular regions face scarcity of water because of low or no rainfall. It is one of the most prevalent problems in India. A lot of areas in the country get hit by drought every year while others face it occasionally. Moreover, many factors contribute to the problem of drought which includes deforestation, global warming and more. Drought essay will take us through it in detail. 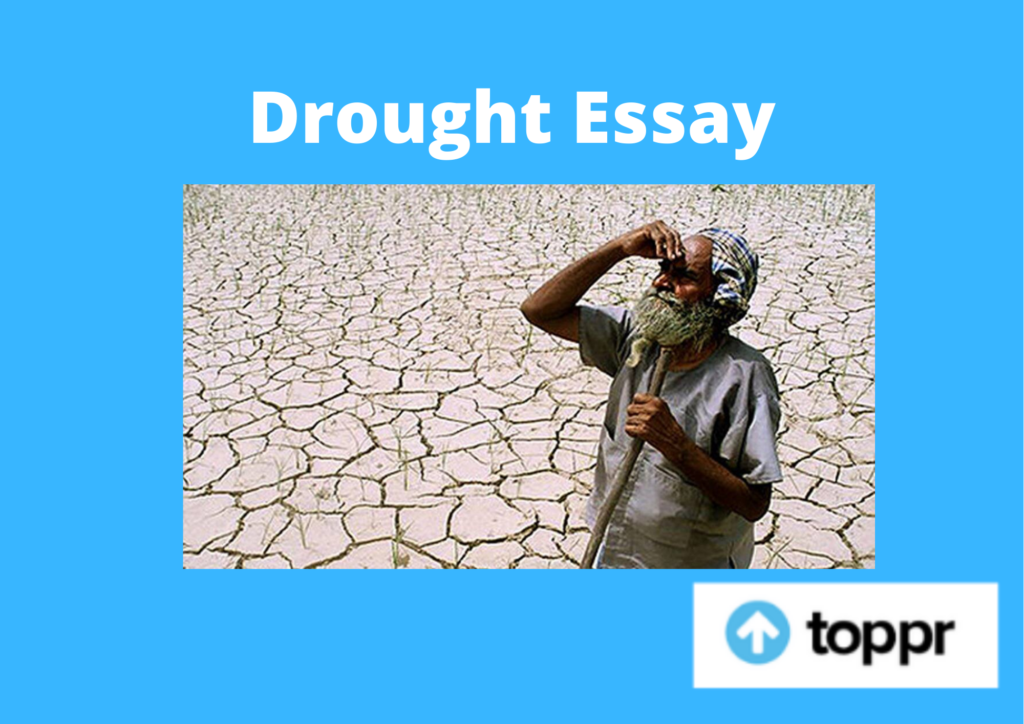 In India, there are a lot of chronic drought-affected regions. They include the West Rajasthan and the Kutchtch regions of Gujarat. The main factor for this is the geographical location of these areas.

Moreover, the monsoon season in this area is also very weak by the time they reach there. In addition, humans degrading the environment also do not help but add to the brutality of this problem.

Other than that, other drought-prone areas are Western Orissa, Rayalsema and Telangana areas of Andhra Pradesh, Jharkhand, interior Karnataka, Chhattisgarh and more. However, the two states which suffer the most from both floods and drought are Uttar Pradesh and Bihar.

As per an estimate, around 70% of cultivable land in India is Drought prone. If we look at the past three years, some areas in Rajasthan have been experiencing very little rains. Thus, it becomes harder for the people in that area.

The most impacted section of the society is the marginal farmers, landless labourers and persons from the economically backward section. In addition, the tribal depending on forest produce also suffer from droughts.

With droughts, the case is different from tsunamis and cyclones. Meaning to say, we can predict it much in advance. Thus, it gives ample time for the Government authorities to prepare for it in advance and cope with this problem.

The Meteorological Department can easily predict the quantity and duration of rainfall with a fair degree of accuracy. As a result, we can counter the intensity and impact of droughts by a series of preventive as well as curative measures.

First of all, we must promote small scale and cottage industry in order to reduce the dependence on agriculture in drought-prone areas. Further, executing a rainwater harvesting project with community cooperation can help in many areas.

Most importantly, we must increase the forest cover by plantation. Similarly, we can also research arid cultivation technologies to implement them in drought-prone areas.

It is also essential to formulate drought management strategies with the involvement of the communities. Finally, we must also introduce crop insurance schemes so that the farmers do not suffer a great loss.

To sum it up, drought is a difficult situation with which we have to deal with. When the severity is high, it becomes all the more difficult to manage it. A lot of people get affected because of droughts every year as it reduces human activities. Thus, it is essential to take effective measures to deal with it.

Question 1: What are the effects of drought?

Answer 1: Drought affects the environment in a lot of different ways. We all know that plants and animals depend on water, just like humans. When a drought happens, their food supply shrinks and their habitat can be damaged. As a result, an increase in disease in wild animals happens because of reduced food and water supplies.

Question 2: Why do droughts happen?

Answer 2: Droughts happen when there is not enough rain for a long period of time. It is not like a dry spell, there is so little precipitation (rain, snow, sleet) that a whole province starts to dry out. Sometimes, a drought can take decades to fully develop.