Dussehra is a festival celebrated in the Hindu religion. It is one of the most important festivals in India. In addition, it is also one of the longest ones. People celebrated Dussehra with great enthusiasm and love, throughout the country. It is time for rejoicing for everyone. The students get ten-day-long holidays from their schools and colleges to thoroughly enjoy this festival. In this Dussehra Essay, we will see how and why people celebrate Dussehra. 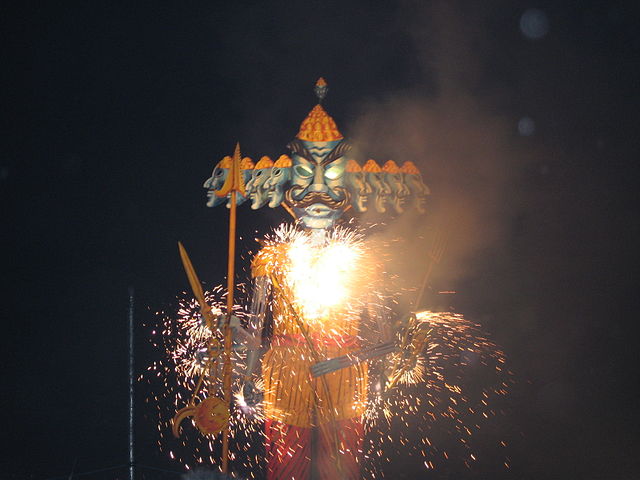 Dussehra falls two or three weeks prior to Diwali. Thus, it falls usually around September to October. Everyone waits for this festival eagerly. It brings great reasons to rejoice by all. The ladies prep for their pujas while the men buy crackers and more to celebrate it heartily.

The Victory of Good over Evil

Dussehra is also known as Vijayadashami in some regions of India. If we set aside the regional differences, the main events of this festival have one motto i.e. the victory of good over evil.

In other words, this festival signifies the victory of the power of good over that of the power of evil. If we look at the Hindu mythology, it says that on this day Goddess Durga removed the demon called Mahishasura from the earth. Similarly, other traditions believe that Lord Rama fought and eliminated the Demon King Ravana on this very day.

Thus, we see how both events have the same outcome. The outcome that is of light over dark, truth over lies and good over evil. Therefore, we see that while people’s belief may differ, they celebrate the very same essence throughout the country.

People all over India celebrate Dussehra with immense enthusiasm, pomp, and show. The different cultures do not affect the celebrations of the festival. The spirit and zeal remain the same throughout the festival.

Furthermore, Dussehra marks Lord Rama’s victory over Demon Ravana. Thus, people enact the battle that took place between them for ten long days. This dramatic form is called Ram-Leela. People in North India act out the Ram-Leela by wearing masks and through various dance forms.

Subsequently, following the Ramayana, they make giant size paperboard effigies of the three principle demons like Ravana, Meghanada, and Kumbakarna. They are then filled with explosives in order to burn them. A man plays the role of Lord Rama and shoots fiery arrows at the effigies to burn it down. People usually invite a chief guest to act as Lord Rama and burn that effigy down. This event is carried out in an open field with thousands of spectators.

People of all ages enjoy this fair. They witness the fireworks and are left mesmerized by the stunning visuals. Kids wait for the most for this event and insist on their parents to take them to see the firecrackers.

In conclusion, Dussehra carries a lot of importance in the Hindu religion. However, people from all religions witness the marvelous act of burning Ravana. It unites people as the audience is filled with people from all walks of life, and not just the Hindu religion. Most importantly, Dussehra teaches us that good always trumps evil and that light will always conquer darkness.

FAQs on Dussehra Essay in English

Q.1 What is the common teaching of Dussehra?

A.1 Dussehra teaches us that good will always win over evil. It shows us the importance of truth and righteousness. Furthermore, it makes us believe in the light at the end of the tunnel.

Q.2 How do people celebrate Dussehra?

A.2 People celebrate Dussehra differently in different regions of India. In north India, they make effigies of demon Ravana and his brothers. Then they fill it with explosives and burn it with an arrow which results in splendid fireworks.