Bangalore is a city in the state of Karnataka. It is located at a higher altitude on the Deccan Plateau. It is very popular for a lot of things mainly its parks and gardens spread across the entire city. Through the essay on Bangalore, we will learn more about this beautiful city. 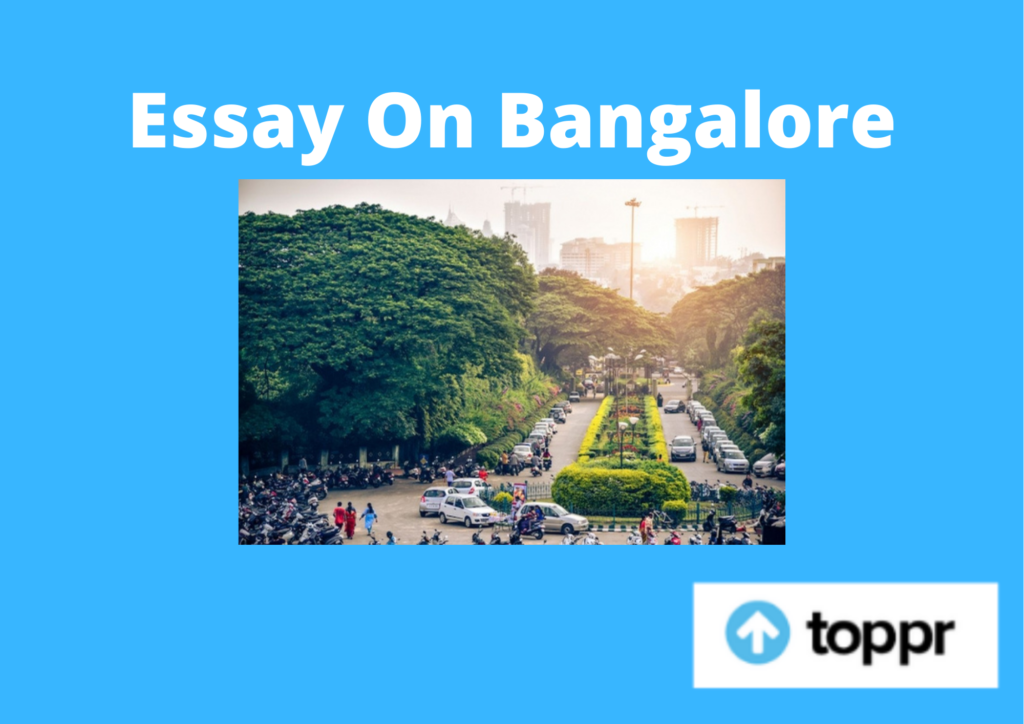 Bangalore is home to various prestigious institutes, colleges and universities. In addition to this, it is also the hub of many software and aerospace industries. As the city offers many benefits, the population of the city is growing day by day.

Most importantly, the city is very clean and elegant despite the increasing industrialization. This city was renamed Bengaluru in 2014. If we consider the southern part of India, Bangalore stands to be the busiest city.

It is the industrial city of Karnataka because it is home to several IT organizations. Nonetheless, the major attraction of the city has to be the parks and gardens. Thus, it is also known as the garden city.

Moreover, the city’s growth rate is so impressive that it is the second most leading growing cities in India. Even though it is developing at a faster rate, it still manages to stay green, clean and free of pollution.

You can enjoy the tropical weather in this city. The three prominent seasons are monsoon, winter and summer. The main religion followed here is Hinduism followed by Islam and then Christianity, Jainism, Sikhism and more.

Bangalore has a major language of Hindi, English, Marathi, Telugu, Tamil and more. Thus, people coming from anywhere won’t face a language barrier. Moreover, it is fun in the sense that it prefers underground music thereby being called the Rock Metal Capital.

Even though the city enjoys concerts, it also has a liking for classical music. The city celebrates most of the festivals like Holi, Diwali, Ganesh Chaturthi and more. It is also famous for its arts and crafts like ivory carving, doll making, Mysore painting, and wood carving.

Similarly, it also has earned a name for its beautiful quality local handicrafts, textiles, and more. When you visit Bangalore, don’t forget to visit the Lal Bagh Botanical Gardens, Ganesha Temple and Sultan’s Palace.

Moreover, the city is famous for the various lakes it has like Ulsoor Lake. In addition, other famous places to visit include the Jawaharlal Nehru Planetarium, National Parks, Cultural Centers, Nrityagam Village, and more.

Therefore, when you are visiting Bangalore, make sure to take a look around all the places mentioned above so that you can make the most out of your trip.

Conclusion of Essay on Bangalore

All in all, Bangalore is a beautiful city with the right balance of traditional and modern culture. Everyone must give this city a visit at least once in their life and see for themselves the excellence of the city bustling with youth and vigour.

FAQ of Essay on Bangalore

Question 1: What Bangalore is famous for?

Answer 1: Bangalore is famous for being the Silicon Valley of India. This capital city of Karnataka is a renowned IT hub and is home to some of the world’s major IT corporations which operate out of the city. Moreover, Bangalore is also the hub to many start-ups and Indian tech companies.

Question 2: Why is the Bangalore climate good?

Answer 2: Since Bangalore is at the centre of the peninsula and is not too far off from the coasts on both sides, it benefits from both the monsoons. The city stands at a height of about 900mts or 3000ft from sea level. As a result, the higher the altitude, the colder it tends to get.