India gate was constructed to honor the soldiers of India that were killed during world war 1. This structure boasts of a beautiful architecture by India. It was first inaugurated in the year 1931 and it still has the same charm. Also, this structure reminds of us the sacrifices made by thousands of soldiers who have given their lives during the first world war. The essay on India gate is an insight into this famous memorial in India. 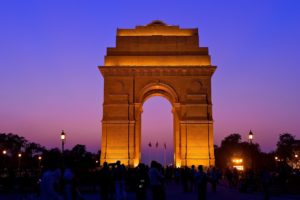 Whenever someone visits Delhi, they never miss the India gate. Thus, it has become one of the integral parts of Delhi and also a major tourist attraction. The locals as well as the tourists coming to visit Delhi flock this place all around the year. Also, for many locals, the sprawling lawns around the gate on both sides is a nice picnic spot.

It is very easy to reach the India gate as it is located centrally. Also, for winters, people pack their lunch and head to India gate along with their friends and families to spend the quality time. One can see children playing in these lawns along with elders sitting. The sight also looks good during the summer months. However, the most beautiful time to visit this place is in the night when it is illuminated fully with lights.

India Gate and its Architectural Design

India is famous everywhere as a memorial as well as a marvelous architectural design. This monument took 10 years to build and was designed under the supervision of Edwin Lutyens. Also, he was a member of the imperial war graves commission and it was formed in December 1917. Additionally, he was specialized in designing of the war memorials and graves. Thus, Edwin Lutyens was given this task of designing the war memorial in India.

India gate is located in the heart of Delhi and is a 42 m tall edifice which is also 9.1 m in width. Also, the gate is mainly made up of red and yellow sandstone and granite. Additionally, the architectural style of the India gate is based on the triumphal arch. So, there is a domed bowl at the top of India gate and it is made with the aim of filming it with burning oil on important days like anniversaries and national festivals. Also, the architectural of India gate is based on Arc de Triomphe de l’Etolie. This is considered as one of the most famous monuments in Paris.

India gate was made to commemorate the soldiers of the British Indian that were killed during the first world war, there was a small edifice that was constructed under the honor of soldiers that lost also lost their lives during Bangladesh liberation war in 1971. Thus, Amar Jawan Jyoti is considered as an integral part of the India gate. Amar Jawan Jyoti is seen as a black pedestal with a rifle inverted covered with a black helmet on the top.