500+ Words Essay on Cruelty to Animal

All laws of benevolence prohibit animal cruelty. In the event of livestock, no plea can justify cruelty, as bad creatures can do little to protect themselves. There are many types of cruelty to livestock. It is suffered primarily by those who have little knowledge of how the sensitive equilibrium of nature is to be maintained by different species. The Cruelty To Animals Essay is an insight into the cruelty that animals suffer and what solutions can be adopted 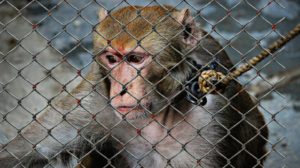 At the top of the list is a kind of’ government-sponsored cruelty that is evident from the sorry state of our zoos where animals are kept in cramped cages, some of which’ stink’ so badly that you can’t get the strength to look at the animals more closely. Behind the doors of the laboratory is the most horrifying instance of cruelty — young animals in the laboratory are being tortured in the name of studies and experimentation.

In cosmetics, 60,000 chemicals are used and often tested on rats, rabbits, guinea pigs, mice, and monkeys. To determine corneal irritation, corrosive chemicals are injected into the eyes. In order to determine tissue deterioration, animals are frozen in ice and put on hot plates. Every year, about ten million animals are murdered in experiments.

Other cases of worldwide reported cruelty include rare species such as Liver Ridley tortoises becoming enmeshed in the trawler’s nets, leading in suffocation, or spinal tailed lizards Sold to create aphrodisiacs. In the presence of prospective clients, their necks are snapped.

The fins of the sharks are sliced and the bad animals flow back into the ocean to die a painful death. Frog legs are also cut, which are handled as a delicacy. Also, the juvenile chiru deer fur is used to make’ shawls’ of exotic toosh. Despite hundreds of animals and birds being trapped and killed in the name of custom and tradition, despite the laws.

There is legislation specified solely to save the rare and rapidly decreasing species. For example, the Constitution’s Article 15A(G) aimed at protecting and improving the natural environment. The Wildlife Protection Act of 1972 is another comparable law.

But the anomaly is that there is not enough implementation of any of this legislation. Also, the Wildlife Protection Act, for example, was revised in 1991, but it could not stop India’s exotic bird trade.

Obviously, regulations alone are unable to safeguard animals from extinction. It will only occur if we learn to love and acknowledge the sanctity of both human and animal life types.