Kargil war was a very difficult time that our country went through. Furthermore, it was a crisis situation that ensued a feeling of nationalism, patriotism, and unity among every Indian. This essay on Kargil War will throw light on the various developments of the war and its after-effects. 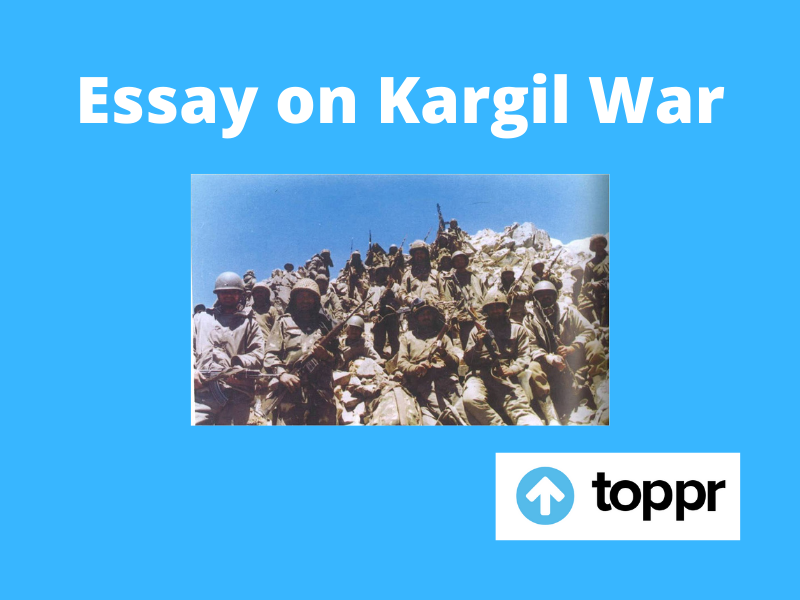 Background of the War

Kashmir is a beautiful region that resides in an extremely mountainous area, containing some of the highest peaks in the world. Unfortunately, this amazing land has remained a constant battleground between the two countries of India and Pakistan.

The dispute began from the First Kargil War in 1947-1948 which led to the establishment of the LOC, line of control. The LOC still divides the land of Kashmir between India and Pakistan.

As part of the Simla Agreement in 1972, there was an agreement that neither India nor Pakistan would contest the border by making use of military means. Since the agreement, both countries began guarding the border heavily for the majority of the year. During the exceedingly cold winter months, both the Indian and Pakistani guards abandon their posts, only to return back in the spring.

However, during the winter of 1998-1999, a surprise attack took place from the Pakistan army and it became successful in crossing the LOC and into India’s portion of Kashmir. Moreover, slowly and gradually, they went on capturing one Indian outpost after another and held their position in Kargil.

The battles posed a huge challenge for the Indian forces as they had to fight on difficult mountainous terrain.  In spite of this challenge, the Indian soldiers showed amazing bravery. After a long struggle, the Indian army became successful in pushing back the Pakistani forces across the line of control.

By July 14, 1999, there were heavy causalities on both sides. However, the sacrifice of Indian soldiers was not in vain. This great struggle of the Indian army has carved a place in the heart of every Indian.

The entire Kargil war was a time of tension and nervousness for the Indian people. It infused the spirit of national pride in every Indian. Most noteworthy, it served as an opportunity of unifying all the Indians together irrespective of caste, colour, religion, language etc.

Conclusion of the Essay on Kargil War

The Kargil war has become an unforgettable event in the history of India. Nevertheless, this was an event that brought about feelings of patriotism in the hearts of every Indian like never before. The brave struggle of the Indian soldiers will continue to be an inspiration for all the citizens of this country.

FAQs For Essay on Kargil War

Question 1: When did the dispute over the region of Kashmir originally began between India and Pakistan?

Question 2: What is the concept of nationalism?

Answer 2: Nationalism refers to a political principle, which upholds the congruency of the political and national unit. Furthermore, nationalism involves a strong sense of shared national identity among the people of a nation.