The sun is the largest star in our solar system. It is present in the centre of the earth and the planets orbit around the sun. The sun is spherical in shape and scientists state that it contains a mass of hot plasma. It is essential for our planet earth as it gives us the energy which we require for the existence of life. Through the essay on sun, we will go through the details and their importance. 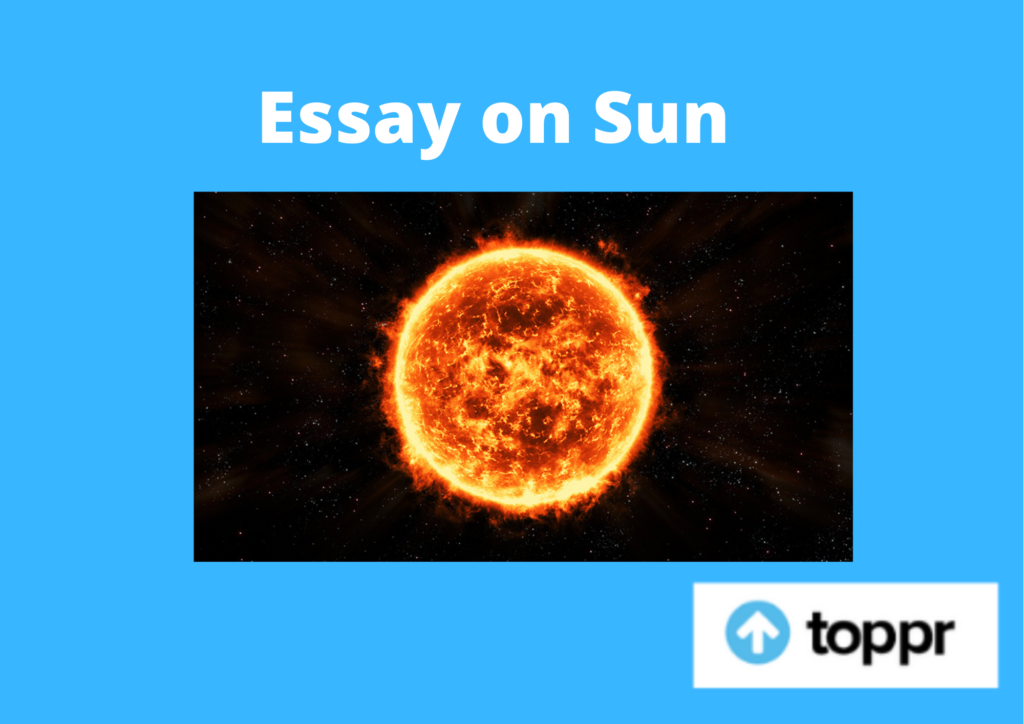 All about the Sun

The sun is basically a large sphere that glows because it contains hot gases. The major gases which make up the sun are hydrogen and helium. In other words, it has 70% hydrogen and 28% helium.

It also contains other hot gases like carbon, oxygen, and nitrogen. Further, there are other elements like silicon, neon, sulfur and magnesium. The sun is a very bright star which is four hundred thousand times brighter than the full moon.

We can measure the brightness of the stars in the solar system by using magnitudes. Thus, the magnitude of the sun is 26.74 which are very bright. It is also the reason why we can easily look at the moon with our bare eyes but not so easily at the sun.

Sun is an essential part of our lives and the solar system. On earth, it offers us solar energy. Solar energy acts as an alternative source of energy from electricity which can offer electricity through solar cells.

If there was no sun, our earth would have been a cold planet that wouldn’t have been able to support life. The energy of the sun also enables the water cycle. In other words, when the rainwater on the surface evaporates, it forms clouds to make it rain.

Finally, we can also use the energy of the sun at home for serving functions like drying our food and clothes. Thus, the sun provides us with numerous benefits which makes life easier on earth.

Conclusion of the Essay on Sun

The sun is an essential component of the solar system. It is what has made it possible for life to exist on earth. Thus, it provides us with many benefits which we must be thankful for. However, it is also important to remember to not indulge excessively in the sun as it may have some ill-effects as well.

FAQ of Essay on Sun

Question 1: What is the importance of the sun?

Answer 1: Sun radiates light and heat which is responsible for the existence of life on Earth. It is because plants require sunlight for growing and animals as well as humans need plants because of their production of oxygen. If the earth does not receive heat from the sun, it will freeze.

Question 2: What vitamin does the sun give us?

Answer 2: The sun gives us Vitamin D. Our body creates this vitamin when we get direct sunlight on our skin when we are outdoors. From late March to the end of September, most regions of the world receive vitamin D in abundance from the sunlight.