William Shakespeare was certainly a very famous writer. The man is credited with an unbelievable thirty-eight plays, two narrative poems, several other poems and a whopping one hundred fifty-four sonnets. So let us take a peek inside the life of this genius with this essay on William Shakespeare. 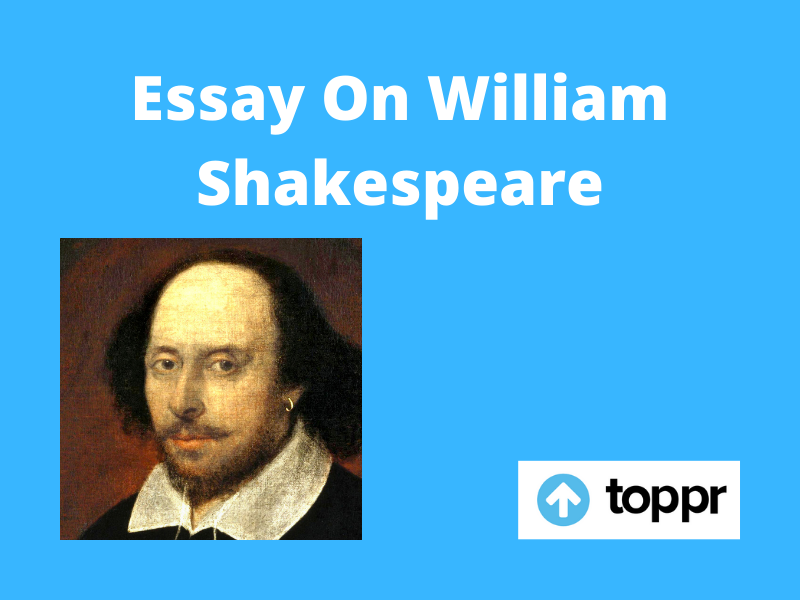 Shakespeare is the world’s pre-eminent dramatist and according to many experts is the greatest writer in the English language. Furthermore, he is also called England’s National Poet and also has the nickname of the Bard of Avon. Such a worthy reputation is due to his top-notch unmatchable writing skills.

William Shakespeare was born to a successful businessman in Stratford-upon-Avon on 23rd April in the year 1564. Shakespeare’s mother was the daughter of a landlord and came from a well-to-do family. About the age of seven, William Shakespeare began attending the Stratford Grammar School.

The teachers at Stratford were strict in nature and the school timings were long. One can say that William Shakespeare’s use of nature in his writings was due to the influence of the fields and woods surrounding the Stratford Grammar School on him.

Warwickshire was an interesting place to live, especially for those who were writers. Furthermore, the river Avon ran down through the town and because of this Shakespeare later got the title ‘Bard of Avon’. At the age of eighteen, William Shakespeare married Anne Hathaway, a woman who in age was eight years older than him.

Shakespeare became a member of one of the famous theatre companies in the city. Moreover, this company was ‘the Lord Chamberlain’s Men’. Also, the theatre companies during that era were commercial organizations that were dependent upon the audience who came to watch the plays.

From the year 1594, Shakespeare became the leading member of the acting group and remained that for almost the entire rest of his career. By the year 1594, the production of at least six plays had taken place by William Shakespeare.

Evidence shows that Shakespeare became a member of a well-known travelling theatre group. After joining this theatre, Shakespeare did plays in the presence of many dignitaries in various places.

Shakespeare, throughout his life, came up with some outstanding pieces of English literature, involving memorable timeless characters with human qualities. Furthermore, the human qualities and struggles of Shakespeare’s characters are such that one can relate with them even today. Shakespeare retired from his acting profession in 1613 and became completely devoted to writing many excellent plays.

Conclusion of the Essay on William Shakespeare

William Shakespeare is, without a doubt, one of the greatest writers of all times. Furthermore, his excellence in story writing, narrative building, and character development is of the highest order. Individuals of such a high calibre appear once in a century or are even rarer than that.

FAQs For Essay on William Shakespeare

Question 1: Why is William Shakespeare so famous?

Answer 1: William Shakespeare’s story writing skills are of an extremely high-quality. Furthermore, his works are characterized by outstanding narrative building around the topics of jealousy, mystery, love, magic, death, murder, life, revenge, and grief. That is why William Shakespeare is so famous.

Question 2: What are some of the most famous works of William Shakespeare?

Answer 2: Some of the most famous works of William Shakespeare are as follows: