When the businesses are run in a capitalistic economy it is likely to have ups and downs. These fluctuations that take the shape of a wave are known as the business cycle or trade cycle or economic fluctuations 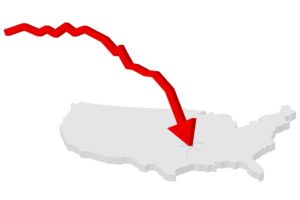 There are 4 phases through which trade cycles are passed. They are prosperity, recession, depression, and recovery. In economic terms, these 4 stages are called economic fluctuations.

The oxygen of any business or its prosperity is profit. In a capitalist country like India when the profits increases or inflates, businessman and industrialists get the necessary incentive.

These incentives make them produce more and thereby they invest more. So, more and more investments lead to more employment. Thus, more income effectively means an increase in demand.

When there is excessive expansion, it leads to diseconomies to continue to large scale production. Furthermore, it also leads to higher wages, rising costs, and any more shortages.

This is termed as a recession in an economic cycle. When the demand for bank credits are rise and high, the interest rates thus tends to increase. Thus, the profits at a lower level are also diminished.

In this part of economic fluctuation, employment, income, and output begin to decline sharply. Thus, it can also be seen in recessionary trends. Furthermore, the investments fall and the enterprises are also discouraged. Thus, it leads to the pessimism that leads to deflation and depression.

Depression period does not continue forever. There is cooling down after a period of time. Thus, in this period the improvement of trade begins. During this period, old debts are repaid, the units which are weaker are liquidated, and many enterprises are reorganized.

Thus, in this time period, the unemployment rate is also gradually decreased. Also, this is the time in which income is generated.

Government of a country takes drastic measures to control the cyclical fluctuations. Also, through the contractionary or expansionary credit policies, the central bank controls the business cycle. Thus, when there is a period of depression, the government should tax less and spend more.

Additionally, the objective here is to increase the effective demand which is the buying power of the people. While during the phase of prosperity, the government should tax more and spend less. There is thinking by the socialists that the capitalist economy is the real reason behind the cyclical fluctuations.

Thus, cyclical fluctuations are the outcomes of the capitalist economy. Here the main driving force and motive is the profit. Thus, the problem can be solved if the system shifts from capitalism to socialism.

Q. The cost that does not fluctuate with the level of activities being changed within a range is called

Q. Considering the break-even analysis and break-even charts, which of the following is considered true?

A. The breakpoint is at the interaction of variable cost line and sales line

B. It is an assumption that the variable cost is fluctuating in direct proportion to the output

C. The break-even chart can deal with any change happening in the product mix

D. The break-eleven chart shows the maximum profit that is possible

Answer: B. It is an assumption that the variable cost is fluctuating in direct proportion to the output